A prized Graptoveria ‘Silver Star’ grown by Perla Alvarez, who lavishes attention on thousands of succulents and cacti in her yard in the Salt Lake neighborhood of Honolulu.

A crown-of-thorns fronts an oversize lot in Foster Village on the island of Oahu, its tall, weapons-grade stalks topped by pink blossoms. Daisy-like blooms cap the interspersed Senecio. Among the cacti runs a graceful swath of low succulents, their deep purple leaves rising in rosettes that curve up and close in like artichokes. But these are no vegetables; these three-dimensional mandalas belong to Perla Alvarez, and properly speaking they are specimens of Aeonium, the genus she’s specializing in these days. Hundreds of variations stretch around the side of Perla’s house. As the eye tracks beyond, her backyard opens into a sea of plants — in the ground, on raised beds, hanging in shade houses — filling the property from border to border with a subtle riot of color.

She has twelve grandchildren now, but in her teens Perla was a singer. She still has the kind of style that plays well on a stage: bright colors, a resonant voice, and a ready laugh. Back in the early 1970s she went to an orchid show at the Blaisdell Center where the legendary plant collector Bill Jones was showing his succulents. She fell in love with the desert rose, Adenium obesum, for its strange, fat-footed trunk, for the way it bloomed all year. Jones gave her one for her birthday, and they became lifetime friends; he also introduced her to the then-recently founded Cactus & Succulent Society of Hawaii, where she learned the genus and species names and began her long association — the society’s mission is to share intelligence, techniques, materials, plants, and stories. She hasn’t missed a meeting since except to travel, often with the succulent group, to Mainland exhibitions, collections, and international conventions, both to learn about and acquire plants. Closer to home, she’s won many blue ribbons and prized pots. Her secret? “Don’t overwater your plants.” 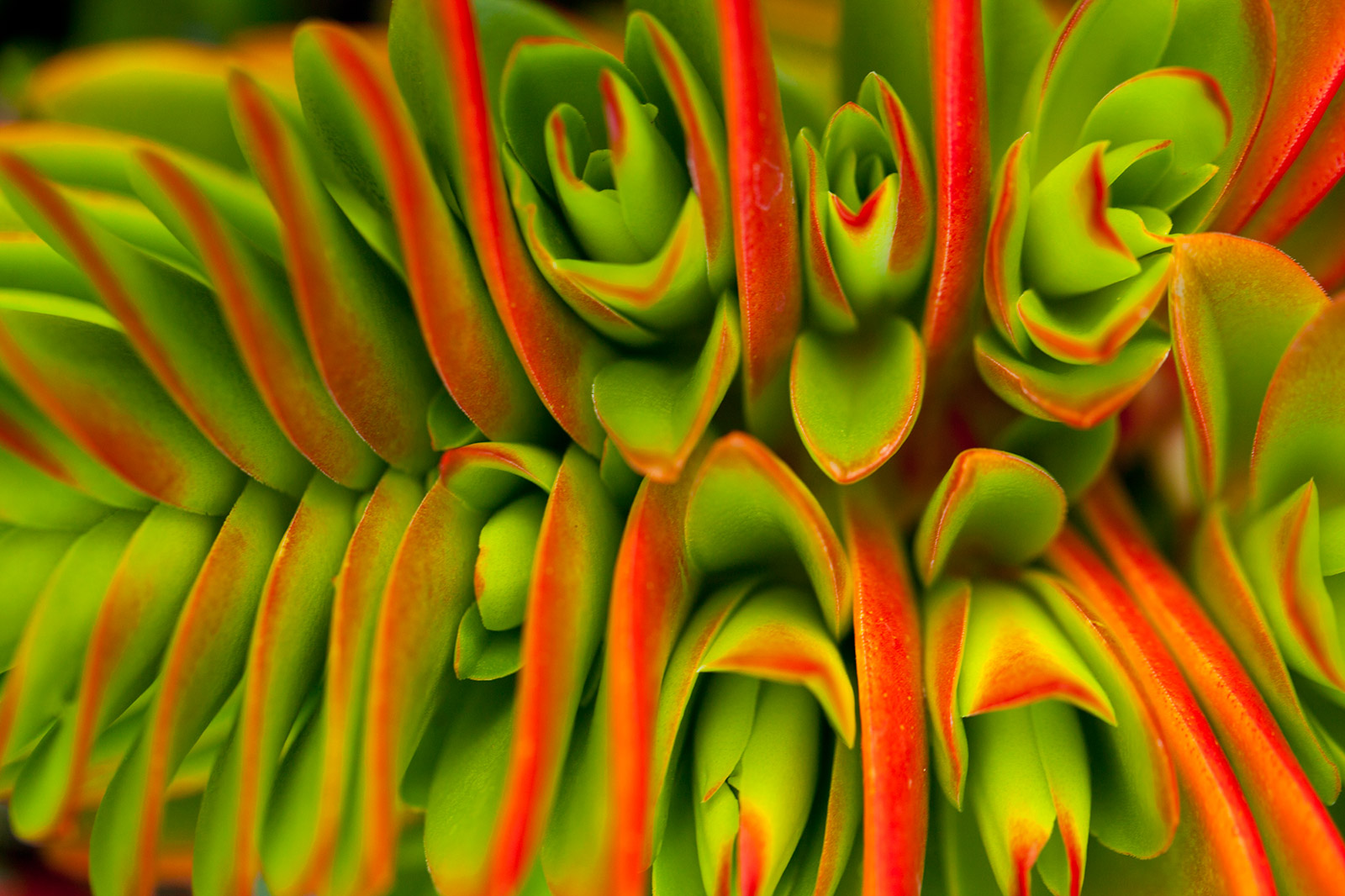 Succulents, broadly defined, are a category of fleshy-leaved plants, including cacti, that have adapted to arid environments. Above: a campfire plant (Crassula capitella) native to Africa.

Over the years Perla’s tastes have changed, from rare agaves to crown-of-thorns, to Kalanchoe, a genus that includes many houseplants, to epiphytes, air plants, the consummate succulents, and now her Aeonium. She had a plant business for a while but these days spends her time caring for her spread, over which she presides in her signature straw hat and lively smile.

“I love my plants,” she says, hand over hand on her heart. How many does she have? “Thousands and thousands. I am a serious collector.”

They’re among the jewels of the plant kingdom, self-sufficient worlds of striking symmetry. They are cones and spheres, corkscrews and tubes, paddles and rods, fat-leaved cabbages and green bubbles … shapes from some alien planet or fantastic underwater landscape. Some are the size of trees, others tiny and as delicate as baby toes, but they are all succulents: plants with thick leaves or bulbous trunks and roots that hold moisture in arid conditions. They include cacti — loosely speaking, succulents with needles — among their ten thousand species.

They’re among the jewels of the plant kingdom, self-sufficient worlds of striking symmetry

Only a few of those species are native to Hawaii, and the rest are not a very invasive lot – night-blooming cereus gets out of hand in the Tantalus forest, but for the most part our comparatively wet climate is unfriendly to plants whose genius is water conservation. Almost all of the thousands of varieties now in the Islands — even aloes — are imported, some, like panini (a.k.a. prickly pear), finding niches in the arid sections of the islands, others find their way into dry area gardens and millions of pots, which is where most local succulents are grown.

On Oahu the plants themselves are on large-scale institutional display at the city facility in Koko crater, and there’s a beautiful cactus and succulent garden on the Diamond Head side of Kapiolani Community College. But the soul gardens, the affairs of the heart and imagination, are the personal ones thriving in local yards and sheds and collections. On Oahu serious growers gravitate to the Cactus & Succulent Society of Hawaii, a group as diverse as their otherworldly plants. 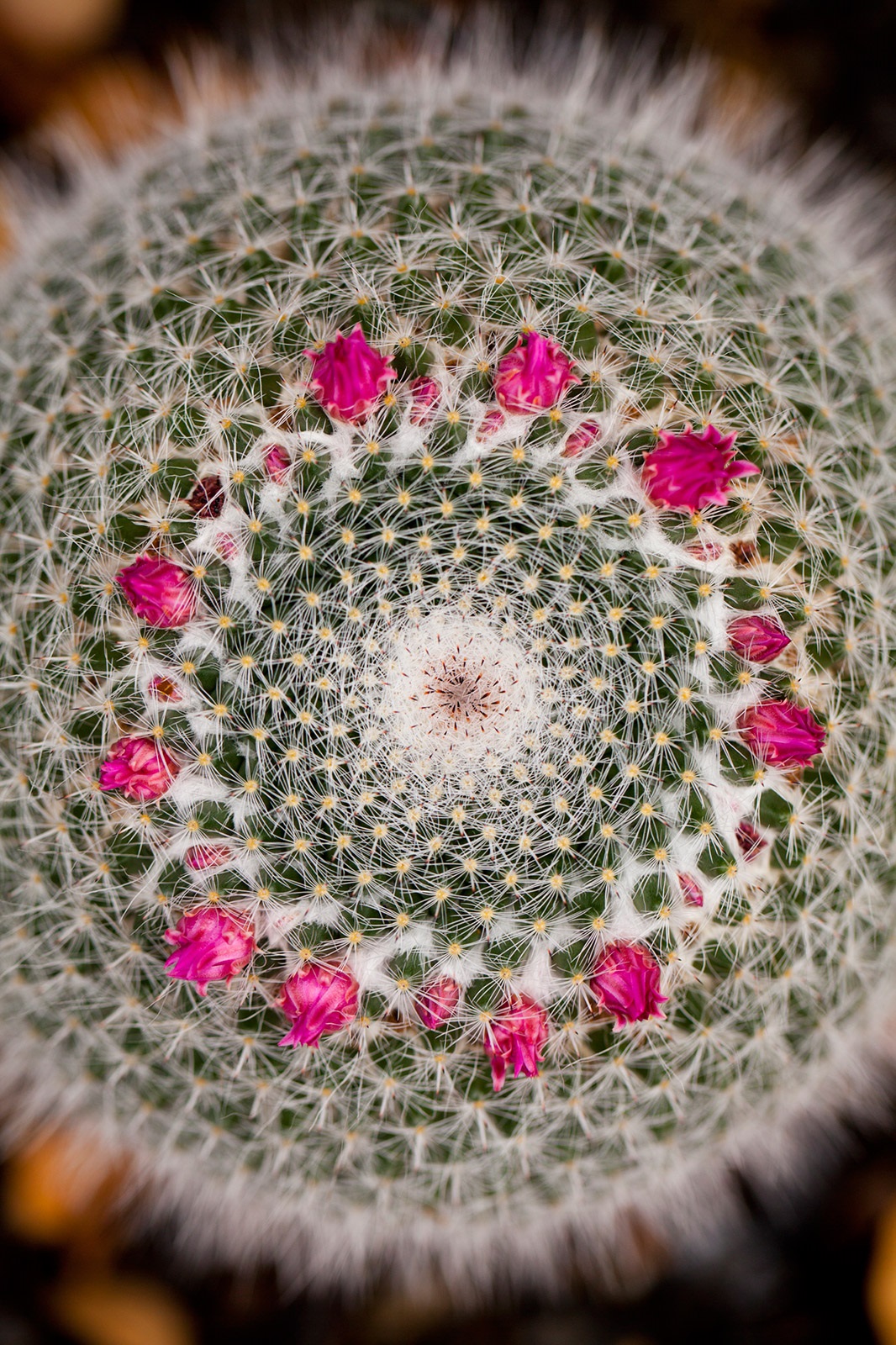 “Succulents are hardy, they're not difficult to grow and they're fundamentally useful in water conservation,” says Earl Young. Young's demonstration garden in Pearl city encourages residents in dry areas to plant “unthirsty” plants like the Mammillaria pictured here.

The society, now in its fiftieth year, meets monthly at the Susannah Wesley Center in Kalihi, under the steady hand of Nathan Wong, who once coordinated Honolulu’s Community Recreational Gardens. Maureen Fitch, who grows spiky, aloe-shaped Haworthia in Aiea Heights, handles the programs, which feature talks by a member or a visiting specialist. Members bring examples of the plant of the day, set them on a table that runs through the audience, hear presentations, and talk story about plants. They speak in Latin to verify their seriousness, but the real connection is emotional: the desire for knowledge and the ambition to nurture these plants, many of which are endangered in their native habitats.

These days succulents are the celebrities of the “unthirsty plants” movement that’s spreading around the world; many can survive for weeks without a sprinkle. Through his demonstration garden between a curb and sidewalk in Pearl City, Earl Young encourages people to integrate succulents into yards and along sidewalks in dry regions to create water-efficient landscaping, also called xeriscaping. An attractive planting of yellow-bordered agaves rises from a bed surrounded by miniature aloe hybrids, like tiny green squid diving headfirst into the ground. Around Earl’s mailbox sits Monadenium euphorbia, with its thick, sculptured stem. In completely dry weather, he might uncoil his hose twice a month.

Honolulu Board of Water Supply research shows that fully half the water consumed by the average single-family home is used outdoors — it takes enormous quantities to get lawns to grow in dry Ewa, for example, where ornamental grass wouldn’t otherwise survive. “Succulents are hardy, they’re not difficult to grow and they’re fundamentally useful in water conservation, especially compared with grass, which is such a water hog,” says Earl. “Plant a native ground cover like akulikuli (Sesuvium portulacastrum) and you‘ll be a better citizen of the planet. Plus, you wind up with a striking garden.” 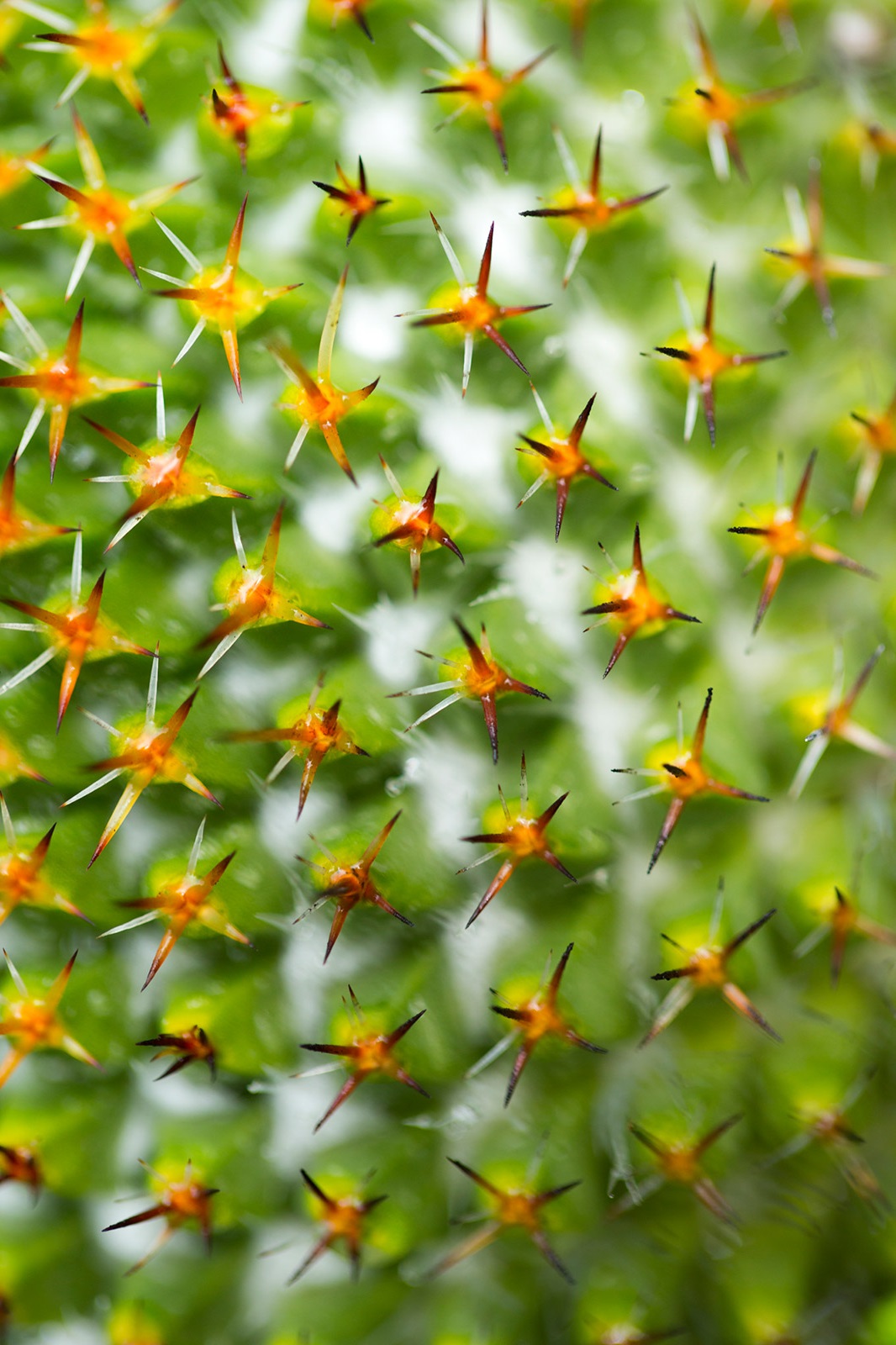 Few succulents are native to Hawaii but they flourish in the Islands' drier areas, require little care, and are strikingly beautiful. Above: a Mammillaria cactus.

Earl’s planted his backyard with larger succulents, including a variety of familiar Sansevieria, sometimes called “snake plant,” this one a monster from the Congo with thick, leathery leaves nearly a foot wide and three feet tall. He keeps a collection of cacti and other succulents in pots; most of the plants are fairly rare, like his Adenia pechuelii from Namibia. “Rare or not, it could make a great street-side planting,” he says. A large Galápagos tortoise keeps watch from his enclosure.

Earl started with cacti, drawn by the odd shapes of the plants, but his engagement really took off twelve years ago when he joined the society. He travels with cadres from the society to find plants at Mainland exhibitions and acquires them through the Internet. Half of his species have come from other society members willing to share offshoots. “They’re very nurturing people,” he smiles. “The rumor is that they take better care of their plants than their kids.”

“It was the most fascinating thing I had ever seen,” Karl Seff muses, describing an old botanical illustration he came across when he was a student at MIT. “It’s like there was a tongue pointed this way, another that way, and they were dead. I stared at it and stared at it. The closer you looked, the more it looked like dead tongues.” The image stuck with him not for its morbidity but for its morphology. “How could a plant look like this?” he marveled.

Now part of his extensive collection of the dead-tongued genus he’d seen, Gasteria, clusters around the breezeway of his Hawaii Kai home: stemless plants with thick, deep green leaves emerging like pages of an open book lain flat. The spot is an oasis that welcomed him home over his years as a professor of chemistry. Beyond the breezeway the land rises up the slopes of Koko Head into a tiered garden straight out of Architectural Digest. It’s an expansive planting, divided into sections with stone walls and steps, framed by columnar cacti soaring nearly thirty feet high, punctuated by large, ribbed barrel cacti and many other species, including fine specimens of Pachypodium, named for their fat, water-retaining trunks that look like elephant legs. There’s a grove of aloe from Madagascar that grow like tall, branching trees. There are many large agaves, including a prized Agave victoriae-reginae, its dark spears trimmed by white piping, as elegant a plant as you’ll see. For all their rarity and diversity, caring for these plants is easier than you might think. “The secret is, in the right spot and in the right medium, they almost thrive on negligence,” says Seff. “I’m leaving for Madrid. When I come back in two weeks, these guys will be fine.”

A fascination with succulents isn’t the only thing that’s kept Seff going to society meetings for the past forty-five years. “The people are so sweet, a different cut of humanity,” he says. “That’s part of it, along with the shared experience, the community. When we get new members, I tell them, ‘It’s not the plants, it’s the people.’”

The jury is still out on the medicinal value of succulents, but the society’s gatherings may turn out to be far more therapeutic than drinking aloe juice. At meetings the years slip away from the faces of the old-timers, and the young don’t just stick to themselves; it’s a real community. Elsie Nakasone, a specialist in dish gardens with a model collection in Pearl City, puts it this way: “Plants grow better when they’re together. That’s true of people, too.”

Late in the evening, Ron Fitch shares a Hydnophytum moseleyanum, an ant plant, with a new member. It looks like a giant, malformed potato clinging like a tumor to a tree. But it’s a succulent, a myrmecophyte that lives symbiotically with ants; its brain-like interior channels provide a nest for the insects, which in turn protect the host plant from would-be attackers. Its weird shape echoes the varied morphology on display on the central table — a bit of Peter Max, a bit of fractal topology, a bit of Flash Gordon on Mars. It may be that people who embrace their sense of wonder are more open to life in all its forms, and so more open to one another. They and their collections certainly seem happier for it. The more you get to know them, the more you want to be their plant.

vol. 16, no. 4 This article first appeared in the August/September 2013 issue of Hana Hou! The Magazine of Hawaiian Airlines