Above: Little else compares with the feeling of catching your first wave on Waikiki Beach. With multiple beachfront locations, Faith Surf School is consistently rated one of the best places to learn Hawaii's favorite ocean sport. Photo: Faith Surf School

It’s 7 a.m. and the sun, whether you like it or not, is barging into your Waikiki hotel room, as if saying, “Hey, wake up! You’re on vacation!”

After a cup of Kona coffee from Island Vintage Coffee (2301 Kalakaua Ave., Waikiki, 808-926-KONA, www.islandvintagecoffee.com) at the Royal Hawaiian Center, head down to any of these three hotels — Outrigger Waikiki on the Beach, Sheraton Waikiki, or the Outrigger Reef — for the surf lesson with Faith Surf School (808-931-6262, www.faithsurfschool.com) that you booked in advance. This family-run school, started by professional big-wave surfer Tony Moniz, offers 90-minute group, semi-private, and private surf lessons right in Waikiki, the birthplace of the sport. There’s nothing more exhilarating than catching your first wave, especially in these friendly waters. The feeling of riding a wall of water, the wind whipping in your hair, is unlike any other experience you’ll have in the Pacific Ocean — and one you won’t soon forget. Have your GoPro handy for some brag-worthy Instagram shots.

After catching your fair share of waves, you’ll probably be starving. Grab breakfast at Koko Head Cafe (1145 C 12th Ave., Kaimukī, 808-732-8920, www.kokoheadcafe.com), a lively brunch spot in the charming neighborhood of Kaimuki, about two miles outside of Waikiki. Run by “Top Chef” finalist Lee Anne Wong, this spot features her innovative twists on traditonal breakfast and brunch dishes, like kim chee bacon cheddar scones, a skillet dish with miso-smoked pork, five-spice pork belly with scrambed eggs and chicharron, and a poi biscuit topped with a soft-poached egg and mushroom gravy. You can linger for as long as you want — the restaurant closes at 2:30 p.m.—even with sandy feet and wet hair. 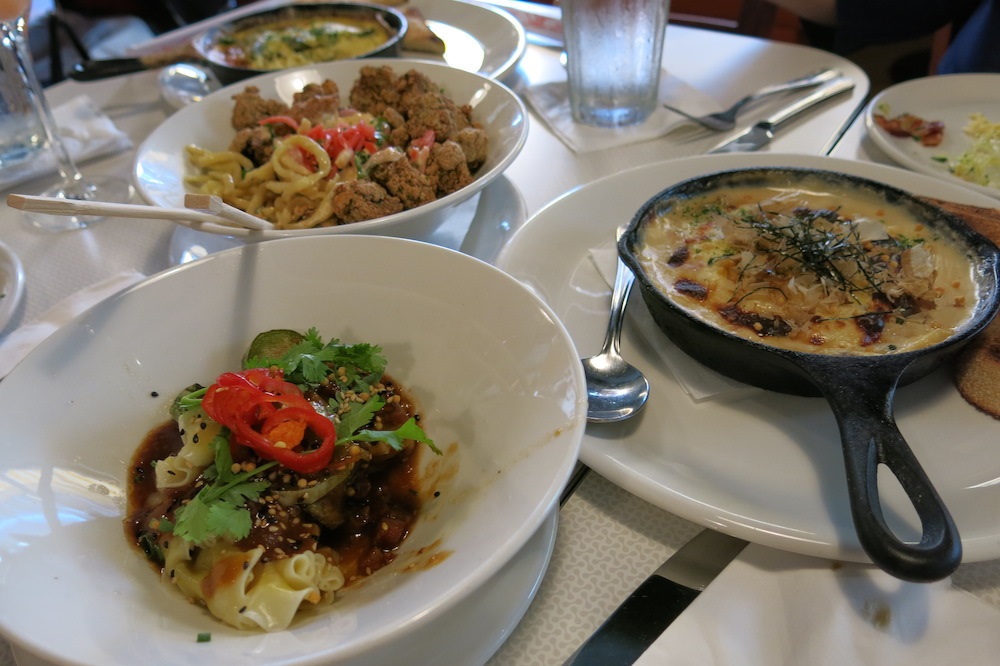 Above: Billing itself as an “Island Style Brunch House,” Koko Head Café has won a following with hip dishes that still reflect Hawaii’s multi-ethnic melting pot.

Itʻs now time to burn off the calories you just consumed with an easy hike along the ridge of Halawa Valley via the Aiea Loop Trail (Keaiwa Heiau State Park, 99-1849 Aiea Heights Dr., Aiea, 808-483-2511), a 4.8-mile hike about 12 miles west of Kaimuki that offers views of the southern coastline of the island from Pearl Harbor to the Waianae Range and even Diamond Head. Much of this area was replanted in the late 1920s with lemon eucalyptus and Norfolk pines. Along the well-trodden path, though, you’ll still see native koa and ohia trees. And halfway along the trail, look for remnants of a B-24 bomber that crashed here in 1944. 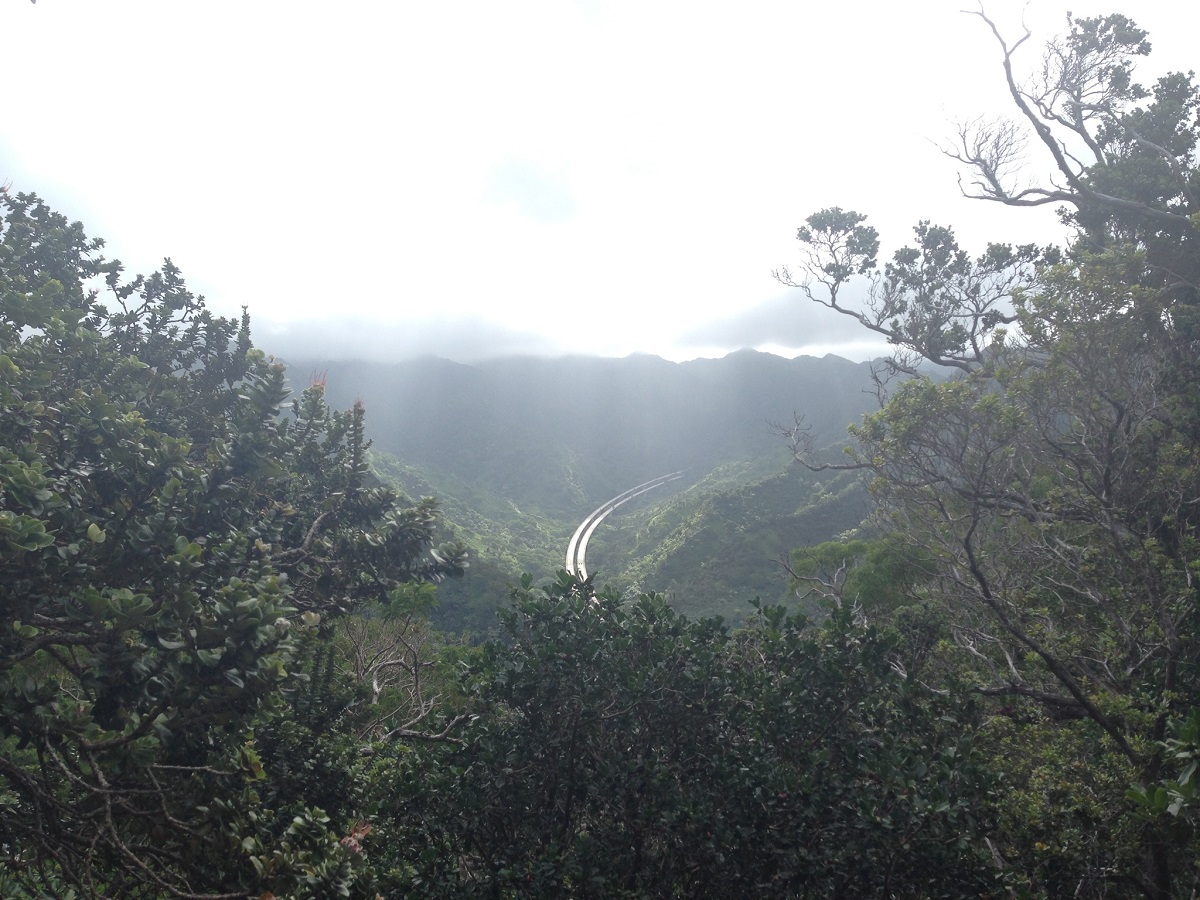 Above: The H-3 freeway can be seen from the Aiea Loop Trail. Keaiwa Heiau State Recreation Area is home to this popular hike, plus the remains of a heiau or traditional Hawaiian sacred site.

It should be just after lunch when you’re back at your car, and the best place for a post-hike snack or an ice-cold brew is The Alley Restaurant & Bar (Aiea Bowl, 99-115 Aiea Heights Dr., Aiea, 808-488-6854, www.aieabowl.com/restaurant.htm). Located in a bustling bowling alley, this casual restaurant serves up popular local-style dishes such as pan-seared furikake ahi, Asian-braised shoyu pork, and the ever-popular oxtail soup. Don’t leave without ordering something from the bakery, particularly its famous lemon crunch cake topped with toffee bits. 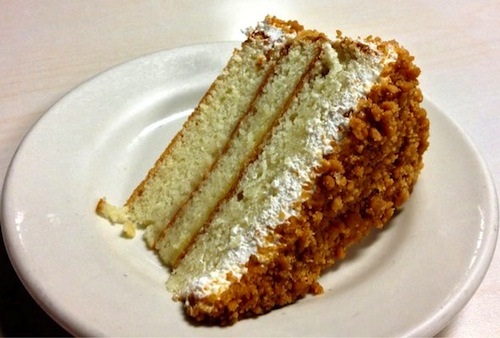 The Alley Restaurant has been featured nationally on The Food Network and The Travel Channel. Locally, they’re famous for their cakes and hearty, local-style bar fare.

Drive back to Downtown Honolulu and rent bikes from Holoholo Bicycles (34 N. Hotel St., Chinatown, 808-221-3899, www.holoholobicycles.com) in Chinatown. Tour around downtown, making stops at the neighborhood’s unique boutiques such as Fighting Eel (1133 Bethel St., 808-738-9300, www.fightingeel.com) for its line of beachy chic apparel and locally made jewelry and Owens & Company (1152 Nuuanu Ave., 808-531-4300, www.owensandcompany.com) for handmade merchandise from independent designers.

Downtwon Honolulu has seen a resurgence with boutiques popping up around Chinatown. Owens & Co. (above) has beach-inspired handmade goods, while Fighting Eel sells women’s apparel. When exploring this area on foot, your best bet for parking is probably the Chinatown Municipal Lot.

If you have time, consider visiting the historic Iolani Palace (364 S. King St., 808-522-0822), the only royal palace that’s part of the United States, just a quick bike ride away. This national landmark was the official residence of the Hawaiian Kingdom’s last two monarchs — King Kalakaua and his sister and successor, Queen Liliuokalani. Built in 1879, it features European architectural styles, including Hawaii’s first eletric light system, flush toilets, and intra-house telephones. Holoholo’s rental rates are $14.99 for three hours and bikes need to be returned by 6 p.m.

Iolani Palace was the seat of the last Kings and Queens of Hawaii, until the monarchy was overthrown in 1893. Built in its current form in 1879, the Palace features unique architectural and an ornate interior. The Palace grounds include a coronation pavilion and the barracks of the royal guard. Photo credit: Hawaii Tourism Authority (HTA) / Tor Johnson

It’s time for a drink, and happy hour at Pint + Jigger (1936 S. King St., McCully, 808-744-9593, www.pintandjigger.com) ends at 6 p.m, too. So you head to McCully for a pint of one of its 21 brews on tap or any of its stellar hand-crafted cocktails like its Moscow Mule (house-infused citrus vodka with muddled ginger, fresh lime, and ginger beer) or the 5th Amendment (Johnny Drum whiskey with Yellow Chartreuse, Fernet, and Hawaii Bitters Company Lilikoi Bitters). Snack on some housemade potato chips or even marrow of bone topped with a chimichurri spread.

Don’t eat too much, as you’ve got dinner reservations at MW Restaurant (1538 Kapiolani Blvd., Ala Moana, 808-955-6505, www.mwrestaurant.com), which was nominated for a prestigious James Beard Award as Best New Restaurant in 2014. The husband-and-wife team of Wade Ueoka and Michelle Karr-Ueoka preside over one of the most buzzed-about restaurants in town, serving dishes that feature local ingredients such as twice-cooked pork tonkatsu, Kauai shrimp with seafood ravioli and a spicy uni sauce, and miso honey-glazed butterfish with locally sourced mushrooms and watercress. Save room for dessert. Try the Tropical Fruit Creamsicle Brulee with lilikoi sorbet, tapioca pearls, tropical fruits, and lilikoi custard; or the MW Candy Bar with macadamia nut praline crunch, salt caramel, Waialua-grown chocolate, and housemade cookies. 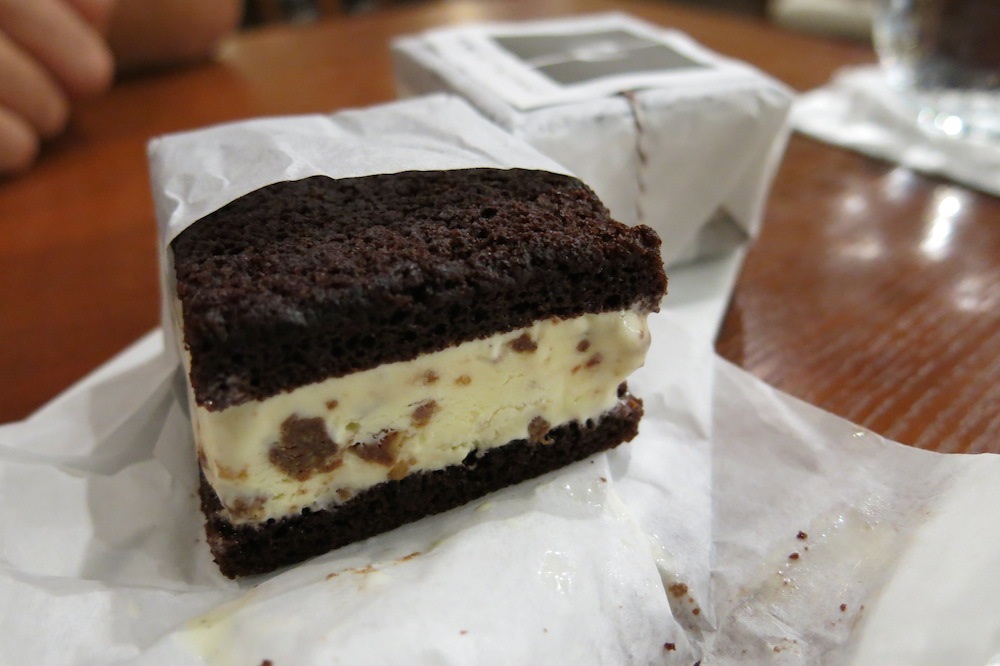 Unwind at The Veranda at the Kahala Hotel & Resort (5000 Kahala Ave., Kahala, 808-739-8888, www.kahalaresort.com), about five miles outside of Waikiki. Relax in the comfy oversized chairs just off the luxe hotel’s lobby and listen to contemporary jazz wafting in the cool evening air. Music runs until 11 p.m. and drinks — like the white truffle martini or a glass of brut champagne — are served until midnight. 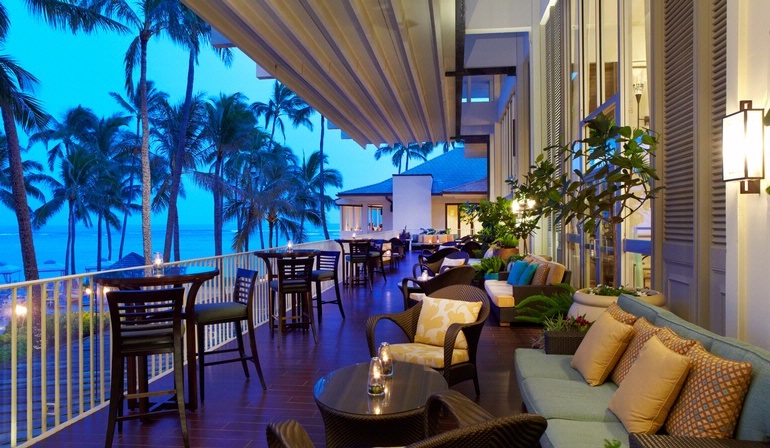 The Kahala is legendary. Its classy location away from Waikiki has made it well-known to stars and heads of state and those just wanting to unwind.

It’s been a long but productive day. Head back to your hotel room and get some rest. If this day was any indication, you’ve got another action-packed day on Oahu ahead.