Above: A wide variety of poke at Foodland Farms Ala Moana. Photo by James Lyau

Poke’s come a long way from its origins in pre-contact times, when ancient Hawaiians feasted on freshly caught fish massaged with sea salt, seaweed and crushed inamona or kukui nuts. Today poke shops are popping up from Los Angeles to Kansas City to New York. But what of poke in the Islands? Where has poke’s path taken this iconic dish?

That’s all at supermarkets and poke shops. What about at restaurants, where poke appears on plate lunches, prix fixe tasting menus and everything in between? Here’s a glimpse of poke in its myriad forms today.

Exactly what you’ll find on the Mainland—NOT! Thanks to poke shops and supermarket poke counters, poke bowls are seemingly everywhere in Hawaii. The hearty serving of rice that anchors the dish transforms poke from a snack into a meal, but there are key differences with many Mainland versions. First, poke in Hawaii is marinated in its dressings, even if for only 15 minutes, to allow the fresh seafood to absorb the flavors. And second, here’s a list of what you’ll never find in a local-style poke bowl: quinoa, chicken, zucchini noodles, cauliflower, corn, kale, bamboo shoots, mango, orange slices, almonds. 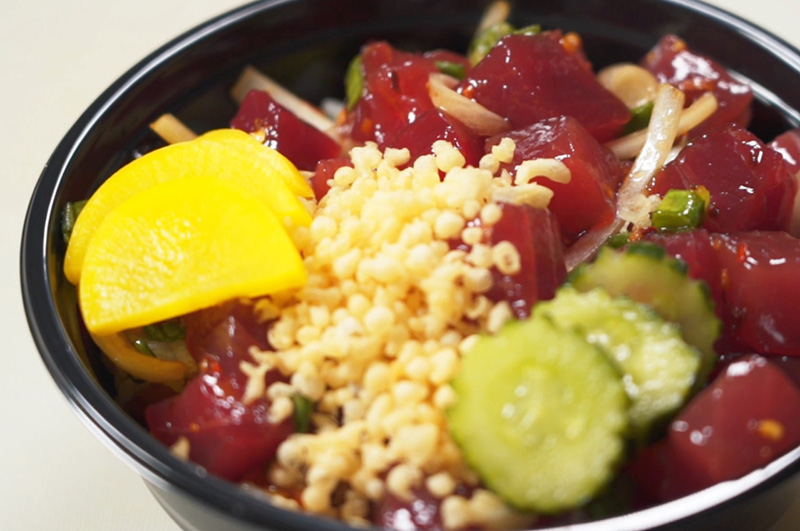 Above: One of the many varieties of poke bowls at Paina Cafe. Photo by Kawika Lopez

Perhaps poke’s most popular contemporary fusion form, poke nachos are just that: fresh poke spooned atop crispy nachos and drizzled with tasty sauces. You’ll find a version with avocado and nori at Nico’s Pier 38 in Kailua and a poke tower surrounded by corn chips at Uncle’s Fish Market & Grill, but the most behemoth is at Poke on da Run in the Pearl City district of Oahu. Here the Mauka to Makai Nachos start with light, freshly fried won ton chips topped with twin scoops of kalua pig (mauka = toward the mountain) and ahi poke (makai = toward the sea). Spicy aioli, a secret Hawaiian sauce and a sprinkling of green onions top a creation so massive it takes a couple of rubber bands to close the takeout container. Sweet, salty, spicy, briny flavor notes dance across the palate, with a lot of crunch. As a meal, it feeds two; as a pupu it’s enough for four. 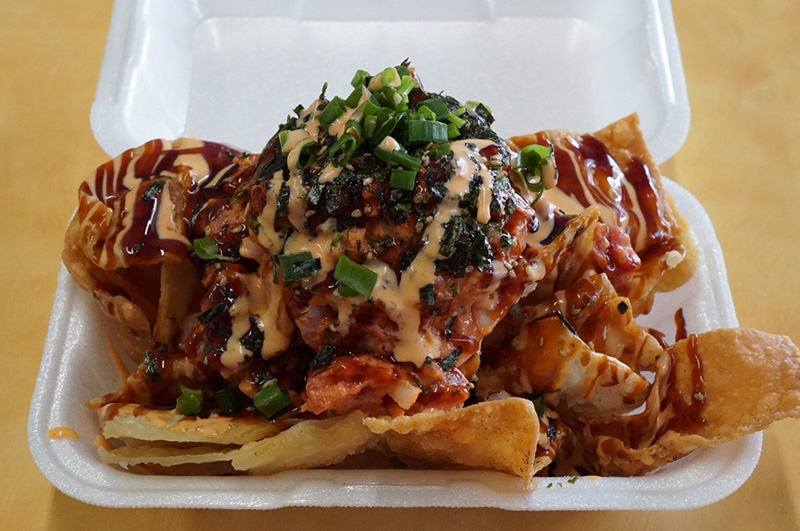 Above: A huge portion of poke nachos at Poke on da Run in Pearl City, Oahu. Photo by Melissa Chang

The iconic dish at Hoku’s restaurant in Kahala combines two favorite Island foods—poke and rice balls—and deep-fries the whole thing. The ahi poke is stuffed inside a ball of lightly seasoned sushi rice that’s coated in salty, briny furikake before it’s fried. Hot and crispy outside, tender and fresh inside, it’s served with a lightly pickled crab-cucumber salad.

Pristine cubes of translucent ruby ahi: That’s what you’ll find tucked inside fresh, crunchy wonton shells at places like Moku Kitchen and Monkeypod Kitchen. As with all good tacos, sprightly garnishes amp up the freshness and round out texture and flavor. This is a rare poke version that you can eat with your hands. You’ll want a frosty glass of your favorite local craft beer to quaff with this.

Above: Fish tacos have been around for awhile, but poke tacos take the fish taco to a new level.

A specialty of East Oahu’s Otsuji Farm, these sliders are an original, highly fusion creation of fresh ahi poke drizzled with furikake and spicy mayo atop a “bun” of tempura-fried kale. The blend of crispy-soft textures and warm and cold temperatures makes this a delectable mouthful. You’ll find Otsuji’s sliders next to its vegetable stands at Hawaii Farm Bureau farmers markets on Oahu on Wednesday evenings at Blaisdell Center, Thursday evenings in Kailua and Saturday mornings at Kapiolani Community College.

Few descriptors suffice for the poke that appears in the 30-odd courses of Sushi Sho’s $300 omakase menu at the Ritz-Carlton Waikiki Beach. The poke of Edomae sushi master Keiji Nakazawa, a legend among gourmands in his native Japan, features singular cubes of fresh island ahi with soy and Maui onion mustard, salmon smoked in banana leaves, and snapper with a macadamia nut soy sauce. It appears as a playful pupu between exquisite bites of nigiri sushi featuring seafood that’s been aged, cured, pickled, seared and otherwise treated to coax out maximum flavor—part of Nakazawa’s quest to create a new style of Edomae sushi equal to the best in Japan but unique to the Islands.

Why more people haven’t thought of this is a mystery: spicy ahi poke tucked inside Hawaii’s ubiquitous cone sushi wrappers. Tanioka Seafoods of Waipahu is West Oahu’s iconic poke shop, with lines of hungry fans snaking out the door at lunchtime. Spicy ahi poke, a best-seller, fills pockets of sweet, bite-size inari, made from thin sheets of deep-fried tofu, much the way hummus fills pita pockets. Tanioka’s sells them in packs of three.

New on the poke scene is this creation from a supermarket. Foodland, popular among locals for its poke selection, debuted this tostada topped with ahi poke, jalapenos, cilantro and ponzu sauce at its Foodland Farms location at Ala Moana Center—and triumphed over K-Town Poke Balls, Beet Poke with Pickled Limu and other creations from award-winning chefs at the store’s Poke Battle. Foodland Farms isn’t your ordinary supermarket. It’s a wonderland of farm-fresh local produce, meat from Island ranchers and fresh seafood, much of it prepared on-site for customers to enjoy at a dining area in the store. 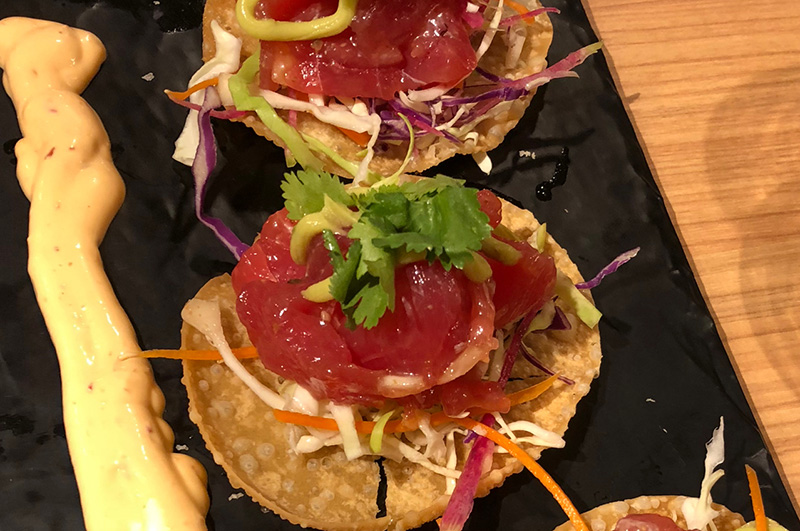 Above: The Ahi Poke Tostada at Foodland Farms. Photo by Kawika Lopez

What else is out there? What discoveries will you make on your own poke explorations? And most tantalizingly, what’s next for Hawaii’s favorite pupu?

Want to learn how to make poke on your own?

See how five of Oahu's most popular poke spots make theirs.

Foodland Farms has a wide selection of poke bowls including the California Roll Poke Bowl.

Visitors and locals flock to Ono Seafood in Kapahulu for the classic Shoyu Ahi Bowl.

Marlin is the featured ingredient in the A`u Poke Bowl at Nicol's Pier 38.

The Shoyu Poke Crunch Bowl is one of the most popular bowls at Paina Cafe.