Above: the famous surf break off Waikiki beach, with the silhouette of Diamond Head in the background, attracts regular surfers even at early morning.

It was a Wednesday morning, just after sunrise, and off in the distance, a pod of spinner dolphins played in the calm waters outside of Waikiki.

I was sitting on my longboard, in between sets at Queen’s, watching the sun peak over Diamond Head, turning the skies a fiery orange.

It was a magical morning. And it’s like that almost every time I paddle out.

This is why I surf. To be part of nature in a very tangible way.

And riding waves happens to be a lot of fun, too.

It’s an inexplicable thing, surfing. You are in pursuit of pulses in the ocean, an energy that creates rideable waves of water. You pore over tide charts, study wind forecasts, analyze data from offshore buoys. You turn into a mad scientist of sorts—and all for that rush of adrenaline you get from gliding on a fiberglass board across the face of an ocean wave.

The author paddles her board in the bay east of Honolulu, between Diamond Head and Koko Head, one of many surf spots on the south shore of Oahu.

I got back in the ocean 15 years ago, committing to paddling out in the early hours before work. I was so committed, in fact, I dropped $300 on a used 9-foot Tommy Tanaka longboard. That was a lot of money for someone who just left graduate school with a huge student loan and a reporting job at a local newspaper. But I had this nagging pull to the ocean, this wild and glorious world.

It may be cliché to say this, but surfing, for me, has been therapeutic. Whenever I’m stressed or frustrated or bored or frantic, this is where I’ll go. There’s something calming about the ocean, even in its ferocity. Almost as if its unpredictable nature is soothing. That life, like the ocean, can be both treacherous and beautiful.

Growing up on Oahu, the ocean was our playground, the place where we met friends, shared food, fished, and played. And every beach holds a different memory for me. I spent weekends riding the friendly and crowded surf in Waikiki. My family and I fished along the shoreline in Nanakuli and Hawaii Kai. And I’ve walked along the two-mile stretch of sand in Kailua more times than I can count.

But it’s the surf in Hawaii—and particularly Oahu—that really doesn’t compare to anywhere else in the world. 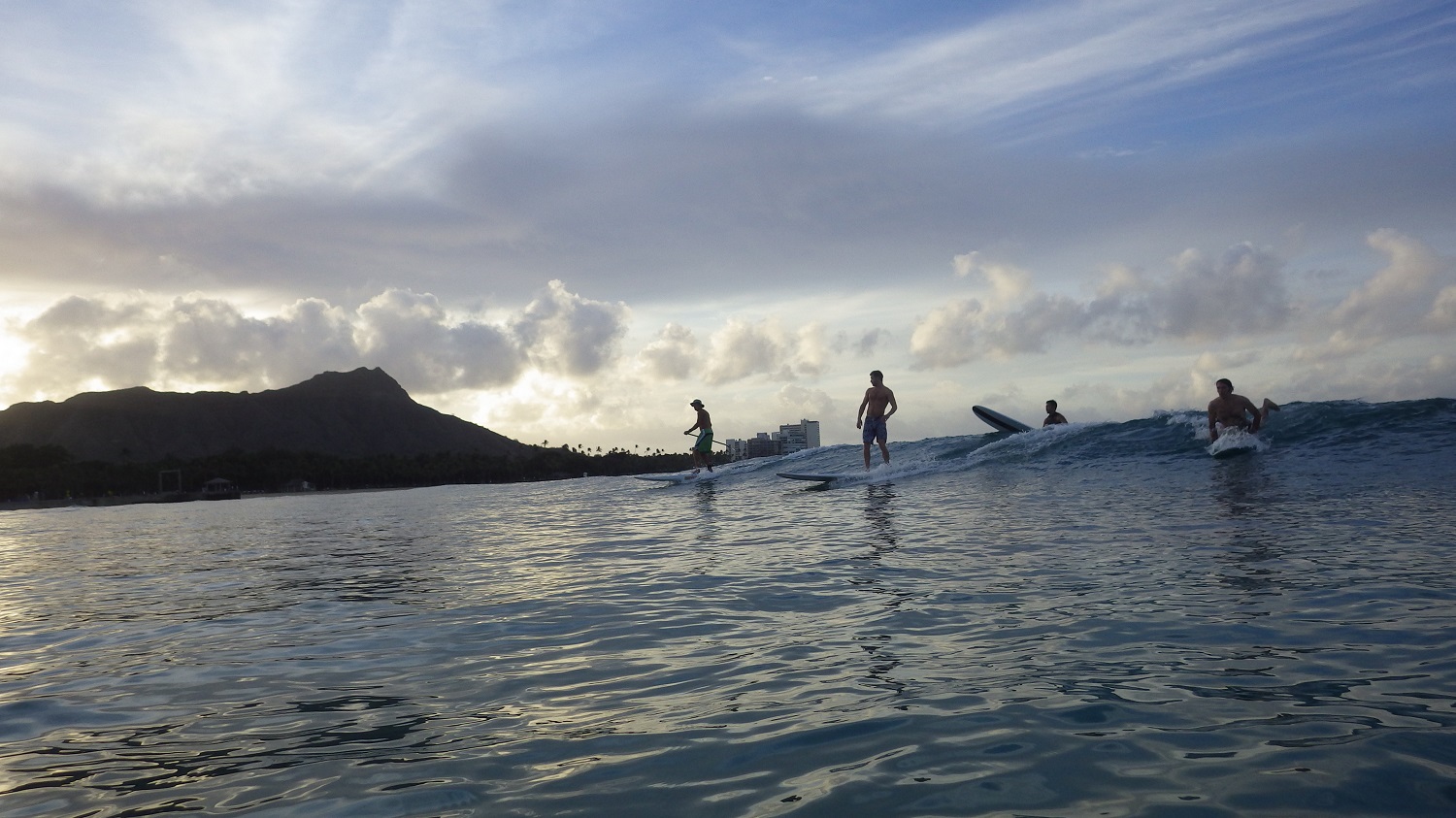 An early morning swell approaches Waikiki Beach, with the iconic pink of the Royal Hawaiian Hotel in the background. The beach is home to surf schools and beach boys offering lessons.

The island’s coastline is dotted with surf breaks named after people, myths, and landmarks. You could surf a handful of breaks in one session, in fact, just paddling along a small expanse of shoreline.

Summer swells hit south shores, where breaks can be as varied as the friendly, rolling waves of Waikiki to the fierce and muscular barrels of Ala Moana Bowls. But farther east, heading toward Hanauma Bay, the breaks continue in the deeper ocean of Maunalua Bay, which runs from Diamond Head to Koko Head in Hawaii Kai. And as you pass Hanauma Bay, you’ll hit the world-famous bodysurfing spots of Sandy Beach and Makapuu.

Over the years, I’ve come to be very picky about surf breaks. It’s not just about how well-shaped the wave is—though that does matter. I factor in everything from crowd vibe to adequate parking. That said, here are my Top 5 breaks on Oahu: 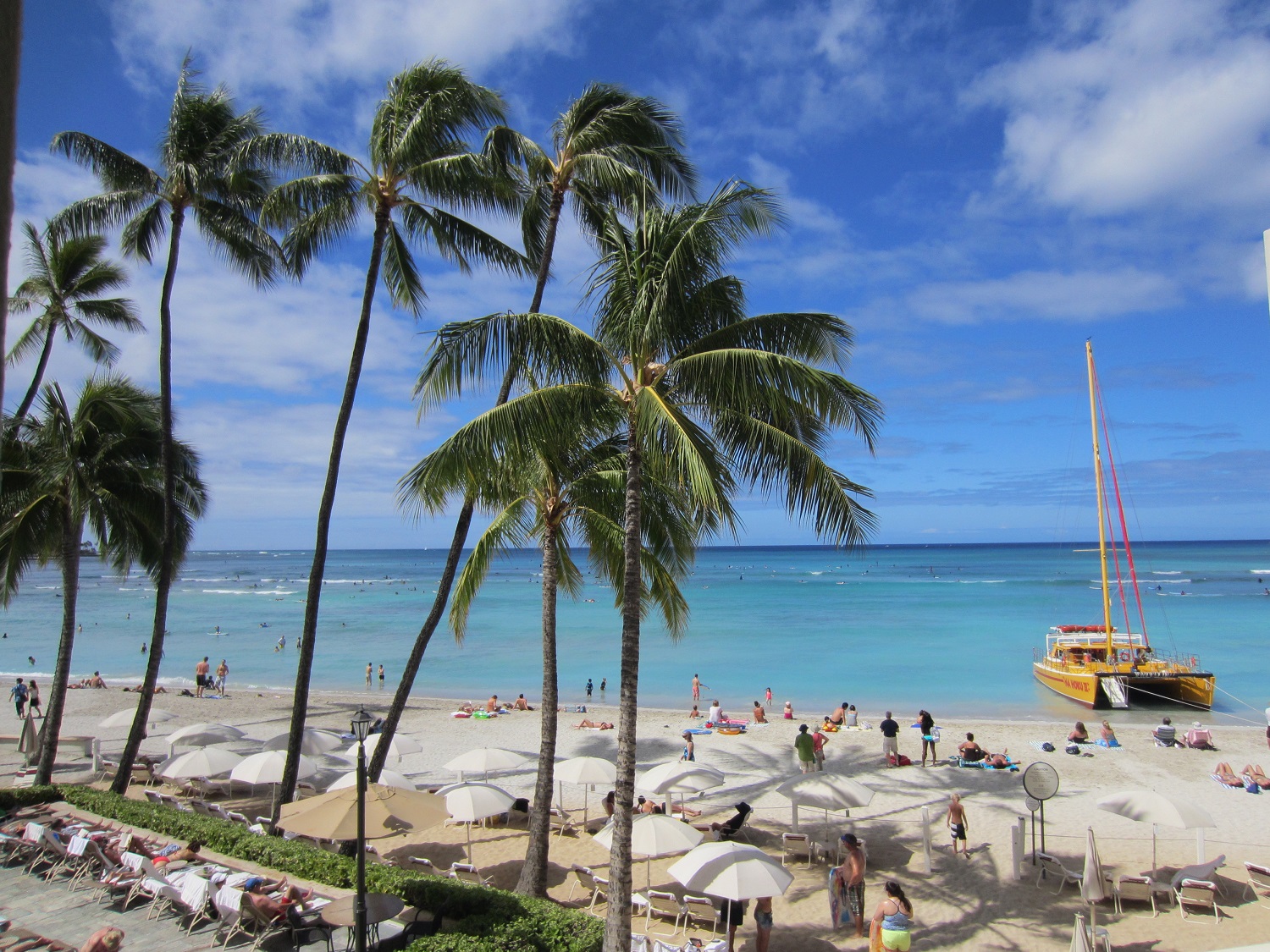 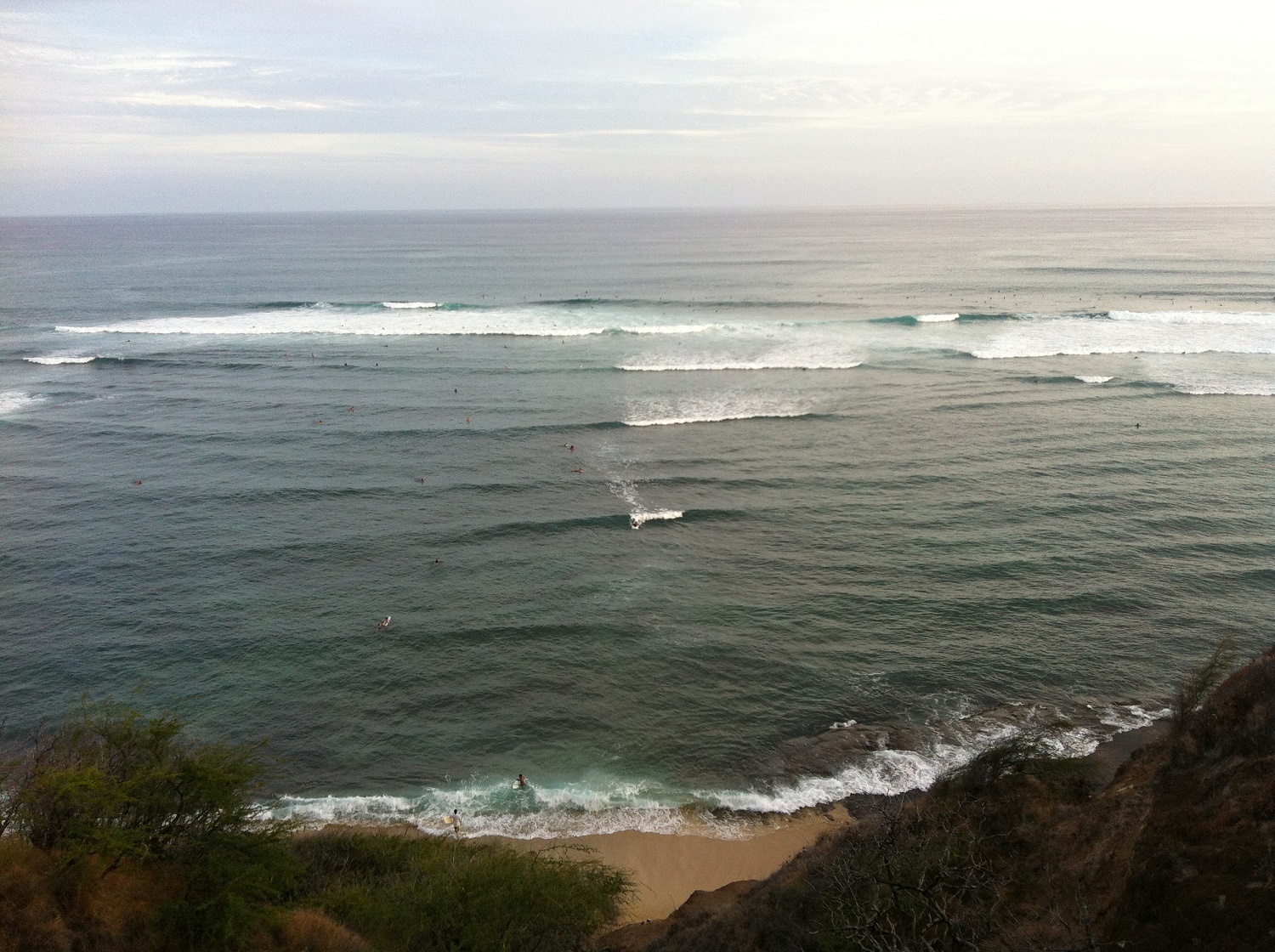 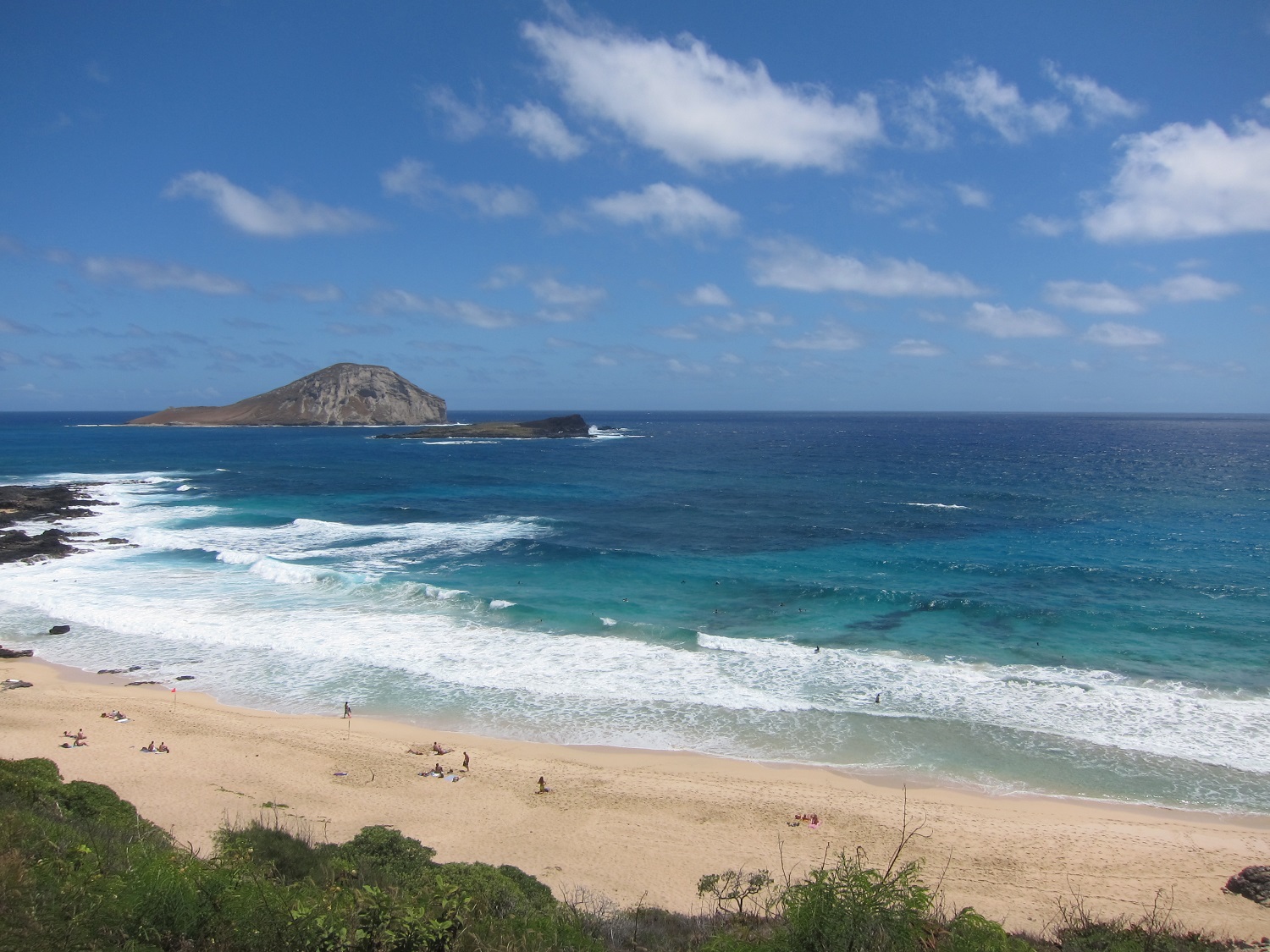 The North Shore comes alive in the winter months, when breaks along this coastline can see monstrous surf that lures pros from around the world. Running for more than seven miles, the beaches here host some of the world’s premier surfing contests, including the prestigious Vans Triple Crown of Surfing. Sunset, Pipeline, Laniakea—these are household names for anyone obsessed with surfing.

But don’t discount the island’s other two shores.

The island’s coastline is dotted with surf breaks named after people, myths, and landmarks.

The eastside is often overlooked, as surf breaks aren’t as visible from the highway and the prevailing tradewinds tend to churn the waters here, making conditions unfavorable. But waves here can be just as heavy and hollow as the ones on the North Shore, particularly during northeast swells.

And the pristine western coastline of Oahu has its share of high-quality peaks, including the long lefts at Tracks, the intense rights at Yokohama, and the legendary waves of Makaha that seem to break all year round. 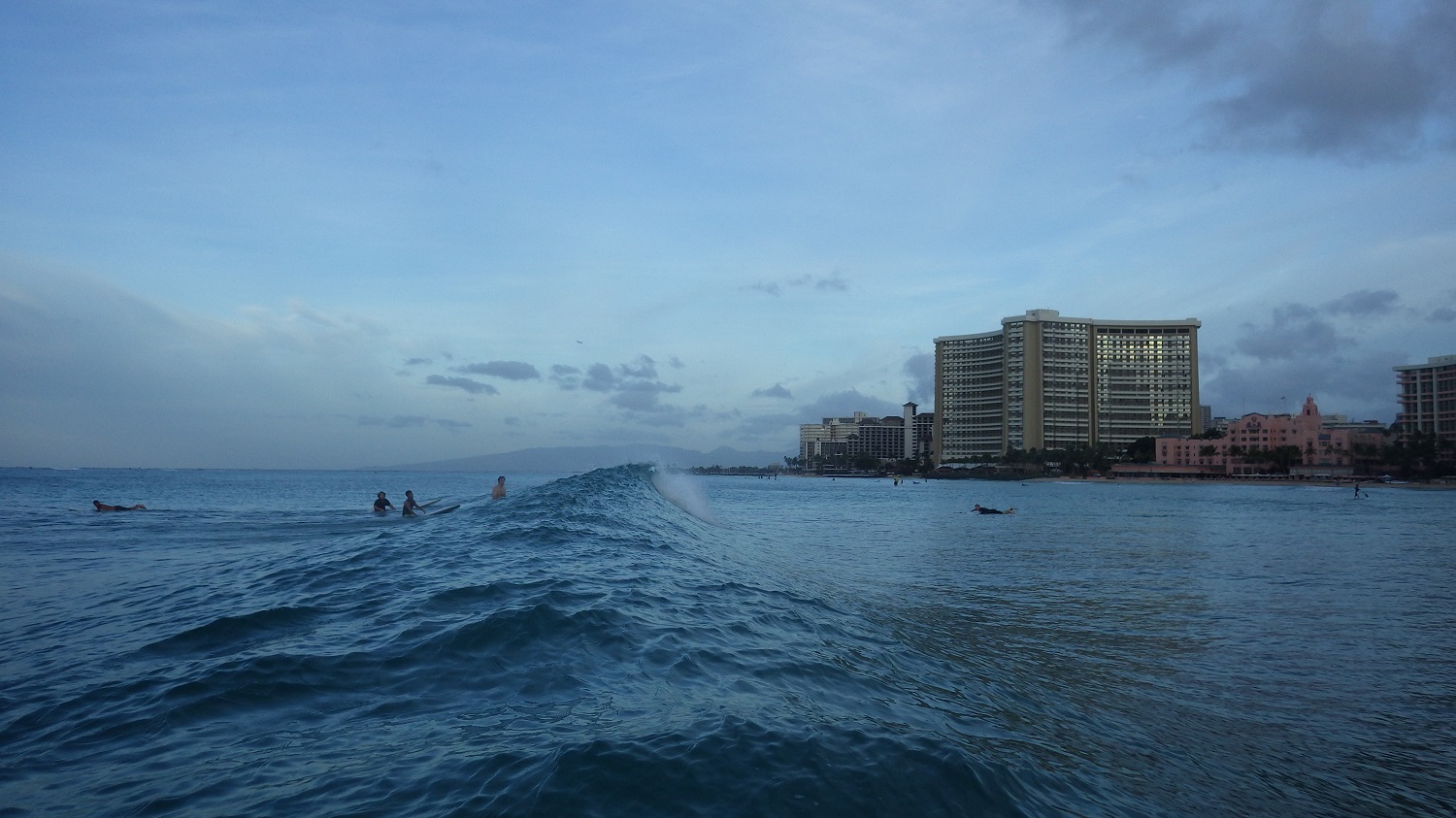 Surfing is a privilege, not a right. And anyone, especially newcomers, should be respectful of the area, the people and the rules of the ocean.

Know your limits: If the waves are too big or conditions too unpredictable and you’re not ready for it, stay on the beach. Like Oahu lifeguards will say, “When in doubt, don’t go out.” You can put yourself and others in danger.

Don’t ever drop in: If there’s a surfer already on the wave—or one paddling in closest to the peak of the wave—back off. That surfer has priority. Cutting someone off is not only offensive but dangerous, too.

Give respect, get respect: There’s a lot of localism and respect involved in surfing, and regulars at certain breaks can be fairly territorial. Be respectful. Know that some locals aren’t always stoked to see new faces at their home break. Follow the rules and you’ll be fine.

Always wear a leash: It’s not about looking cool out there. It’s about safety. When your board gets swept away from you and you're swimming a half-mile after it, you'll be happy you did.

The question, though, is always, “Where can I borrow a board?”

While you can rent indestructible Softop foamboards from a beach concession stand along Waikiki Beach, they’re only really useful in the crowded surf there.

If you’re looking for performance boards by shapers whose names you recognize, consider renting from Koa Board Sports (2420 Koa Ave., Waikiki, 808-923-0189, koaboardsports.com/en) in Waikiki or Surftech (945 Queen St., Kakaako, 808- 596-8693, surftech.com) in Kakaako. At both shops, you can rent high-quality surfboards of varying length by shapers such as Gerry Lopez, Donald Takayama, and Al Merrick. Fees vary by length of rental, but start at around $20 for a full day of use. And both shops employ knowledgeable staffers who can—and usually will—offer insight and advice about local breaks and etiquette.

On the North Shore, Surf ‘N Sea (62-595 Kamehameha Highway, Haleiwa, 808-637-7873, surfnsea.net) in Haleiwa is your one-stop shop for any water enthusiast. You can rent shortboards for $24 a day, longboards at $30. The shop also offers surf tours for more experienced surfers.

In the village of Milolii, the next generation is learning to live from the sea in the old Hawaiian way

These nighttime tours on Hawaii Island get you up close and personal with these peaceful giants.