Few human constructions are as poignant as the lighthouse—a lonely beacon perched at land’s treacherous end to ward off the perils of the night. “Today, as always, lighthouses conjure up in sea-weary mariners welcome feelings of sanctuary, safety and warmth,” Polynesian Voyaging Society cofounder Tommy Holmes once wrote. “They provoke a constant reminder of a sometimes savage sea, evoke the drama of a mariner’s life and recapture the raw loneliness of the lightkeeper.” Since 1840, when King Kamehameha III ordered the construction of a nine-foot wooden platform topped by a whale-oil lamp at Lahaina Harbor, the nine major lighthouses and dozens of smaller navigational lights in Hawai‘i have guided countless seafarers and become emblems of life on these isolated islands surrounded by the world’s largest ocean. 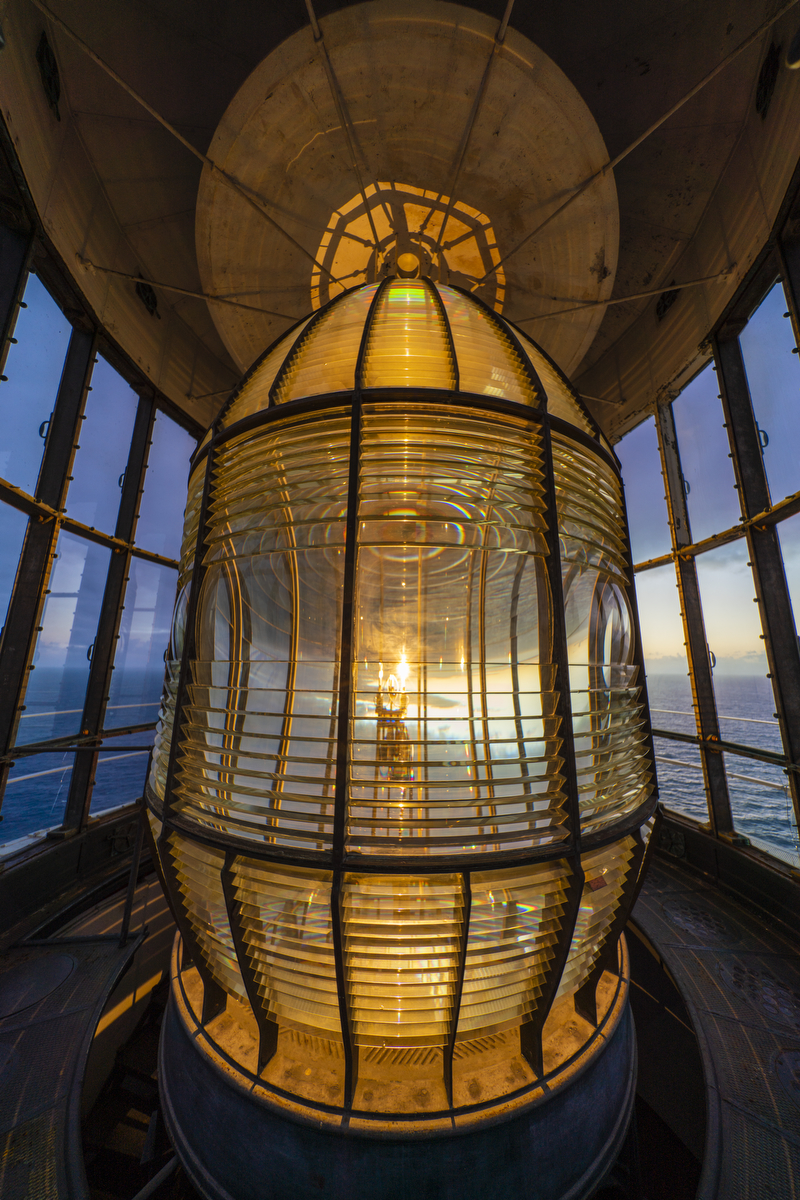 Title spread and above: The twelve-foot-tall “hyper-radiant” lens inside Makapu‘u Point Lighthouse on O‘ahu’s southeast corner is one of the world’s largest Fresnel lenses, a nineteenth-century innovation that uses concentric rings of glass to amplify light. Made up of more than a thousand prisms, the fourteen-ton lens was painstakingly hoisted up the cliff piece by piece from a rocking boat below in 1909, before there was a road out to the site. Facing page: When the light at dramatic Kïlauea Point on Kaua‘i was first illuminated in 1913, the Garden Island newspaper reported that the “lighthouse, like the Cyclops of old, burst forth its shining eye of warning … while the hundreds of country people who had gathered to witness the wonderful sight made the shores and hills ring with astonished delight.” 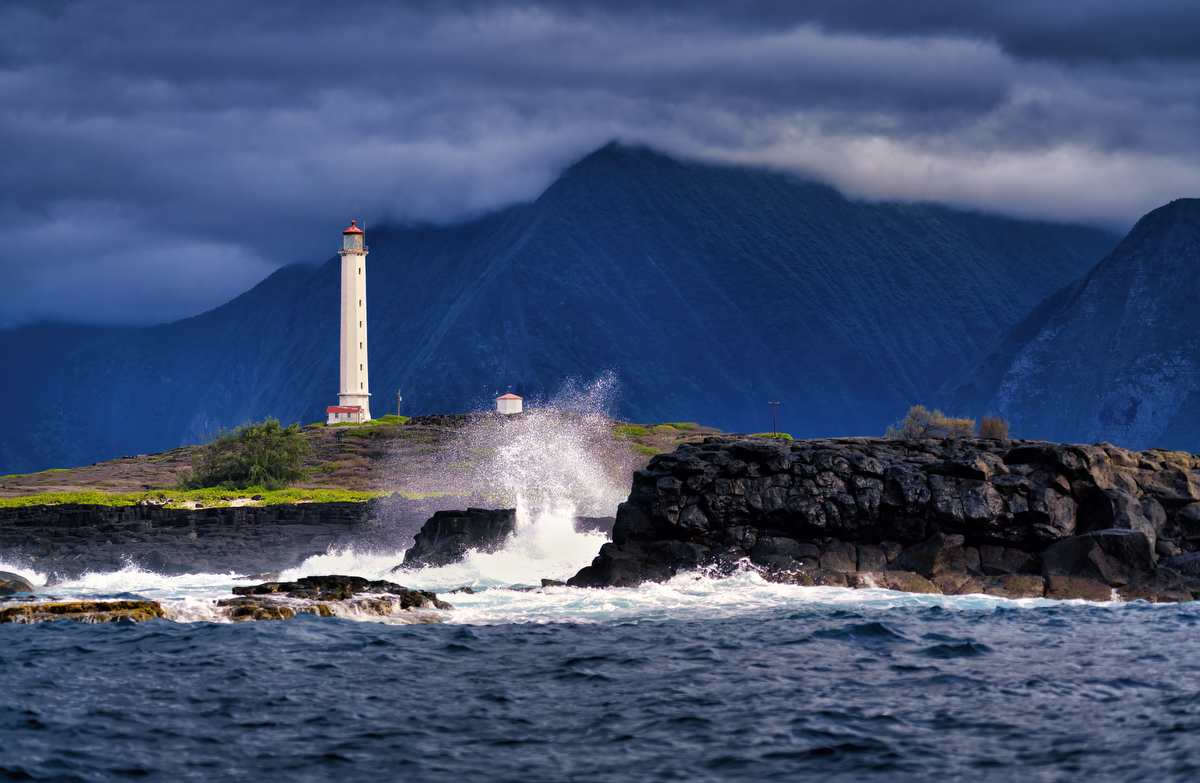 The lighthouse towering over Kalaupapa on Moloka‘i—at 138 feet the state’s tallest—was built in 1909, when the peninsula was still an active, forced-isolation facility for patients with Hansen’s disease, or leprosy. Despite strict separation policies, the resident lightkeepers and their families became friendly with the patients, and the lighthouse was rumored to be the site of a steady craps game. “That light has been very special to the people here,” community leader Richard Marks said when the tower’s old Fresnel lens was replaced with a modern beacon in the 1980s. “It has been here longer than any living person has, and you could always look out and see it sweeping across the cliff. Every one of our people can remember this light looking over us.” 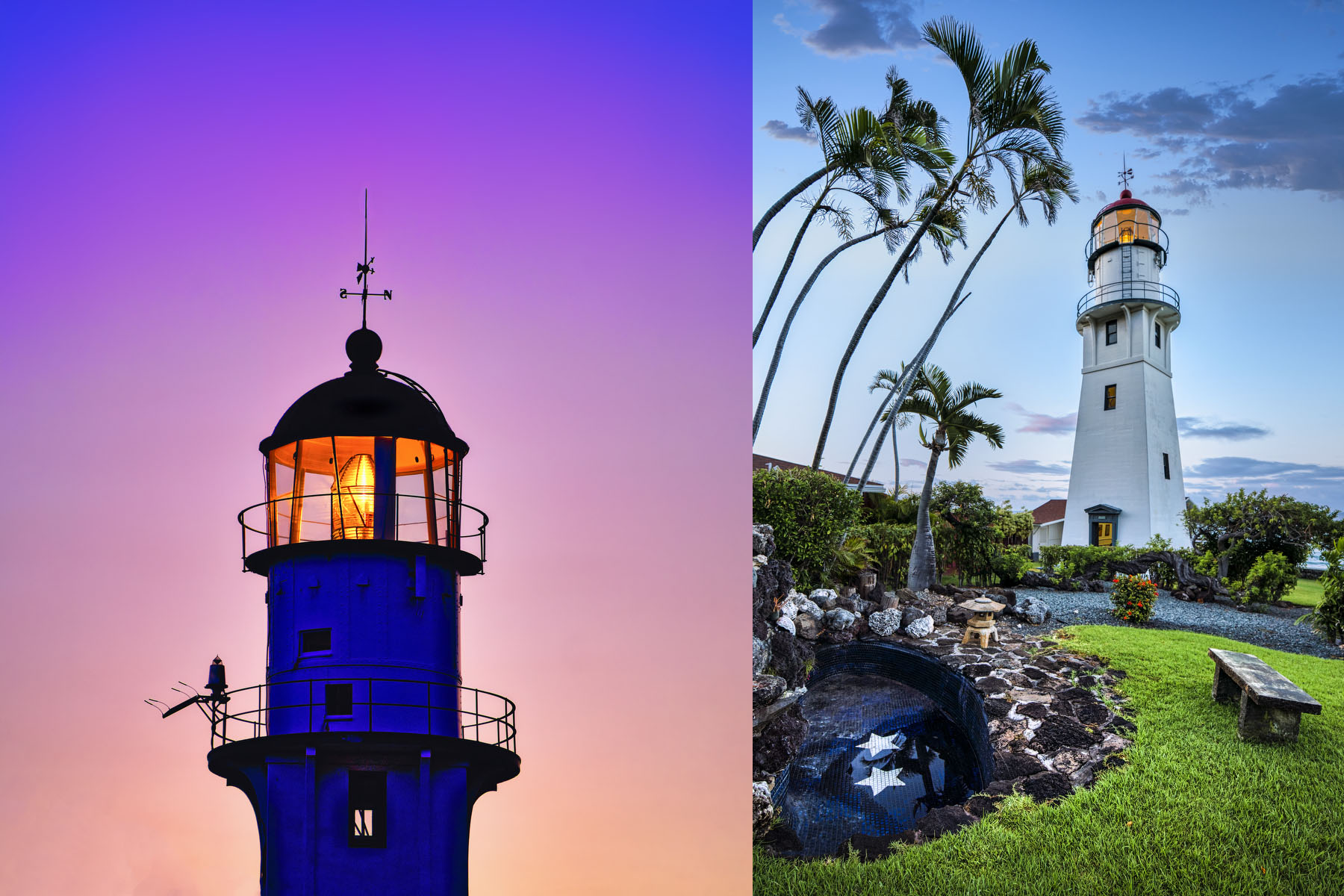 In pre-contact times, Hawaiians kept signal fires burning on the summit of Lë‘ahi, a.k.a. Diamond Head, to help guide canoes through the darkness. Then in 1899, the year after Hawai‘i became a US territory, one of the first large lighthouse towers in the Islands was built on the bluff below. Its tower was later rebuilt and its lamp converted from kerosene to electricity. It became automated in 1924, as all lighthouses in Hawai‘i now are. After the US Coast Guard assumed responsibility for navigational aids across the country in 1939, the adjacent compound of former lightkeepers’ homes became the official residence of the Coast Guard district commander for the Pacific region—the ultimate Diamond Head Road status address. 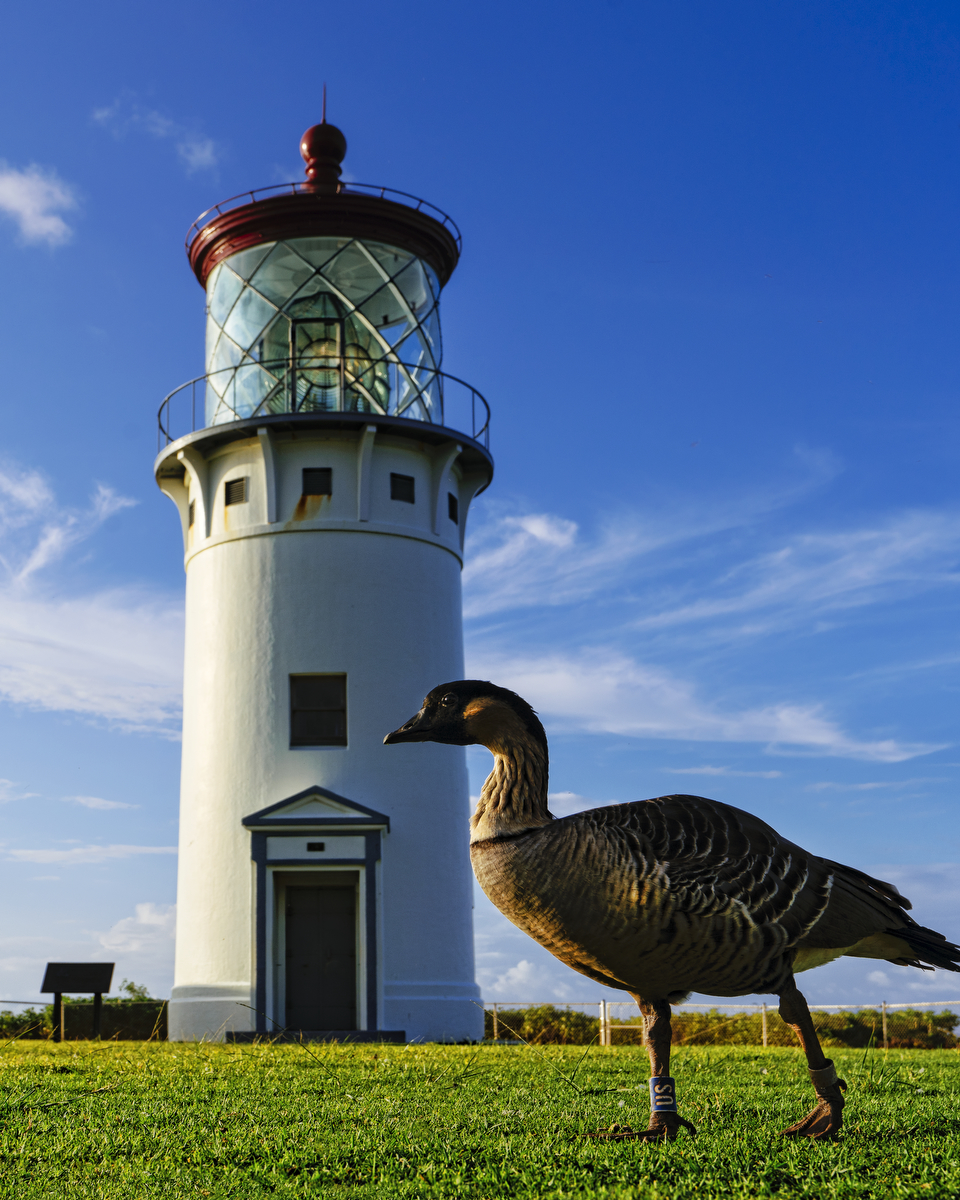 The Daniel K. Inouye Kïlauea Point Lighthouse sits on a narrow finger of cliffs jutting out from Kaua‘i’s rugged north coast within the Kïlauea Point National Wildlife Refuge, home to all manner of protected native species including the nënë, Hawai‘i’s state bird (seen here). The structure was recently restored and, unlike other lighthouses in the Islands, visitors are usually allowed inside to climb the narrow stairway to the diamond-paned lantern room at the top. (As of this writing, however, the lighthouse is temporarily closed to the public due to pandemic precautions.) The light’s rotating “bivalve” lens formerly beamed out a distinctive double-flash pattern, known as its “characteristic” in lighthouse parlance. But after a 1975 attempt to automate the antique equipment failed, the old lens was deactivated and replaced with a more modern beacon. 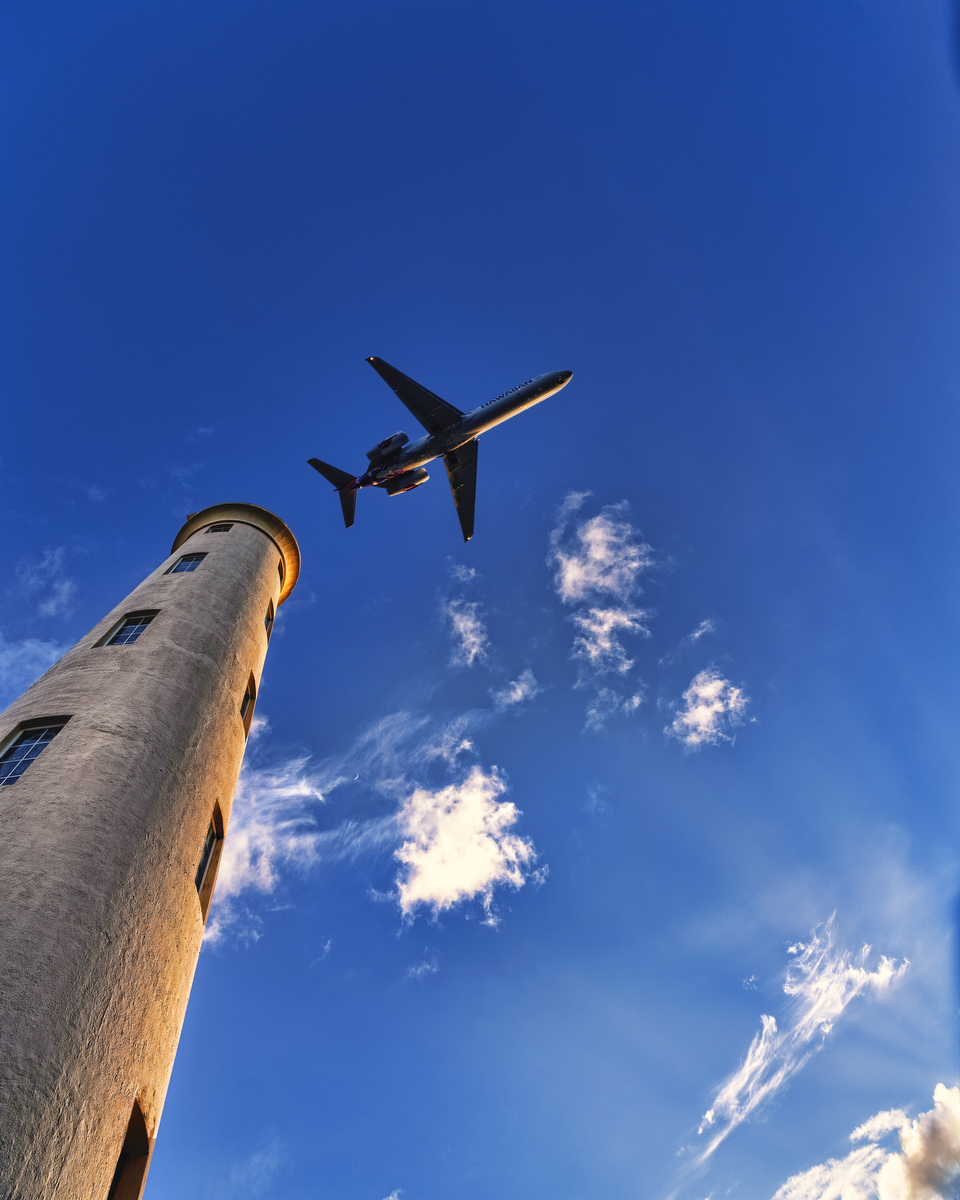 The first navigational beacon built in 1897 at Ninini Point, by the entrance to Kaua‘i’s Näwiliwili Harbor, was a simple oil lamp with a reflector perched atop a rickety, forty-foot wood frame tower. Each evening, lightkeeper Manuel Souza would climb the tower to a glass lamp room described as looking “like a birdcage on stilts” to light the lamp and tend it through the night. Souza was “the soul of hospitality,” reported one guest. “As soon as the visitor hove in sight, he would wave his hat and hurrah with much enthusiasm.” The current eighty-six-foot concrete tower, activated in 1933, now sits in the flight path for Lïhu‘e Airport, and its original lantern has been replaced with a contemporary spotlight.

vol. 24, no. 1 This story first appeared in the January – March 2021 issue of Hana Hou! The Magazine of Hawaiian Airlines