Above: During peak months of migration, whale sightings are a common occurrence in Hawaii.

Everything about humpback whales is big. They weigh 40 tons, as much as a jumbo dump truck. Their pectoral fins can each grow to 15 feet long, about one-third the overall length of an adult humpback whale, and inspired the scientific name of Megaptera, which means, “big-winged.”

All this bigness explains why the arrival of the North Pacific population of humpback whales, after their annual three-thousand-mile journey over six- to eight-weeks from southeastern Alaska to Hawaii, doesn’t go unnoticed for long. In 2019, the first reported sighting came on the first of October off Kee Beach on Kauai’s north shore.

Marc Lammers, research coordinator with
NOAA Hawaiian Islands Humpback Whale
National Marine Sanctuary, wasn’t
surprised by the sighting. An early October
arrival in Hawaii was right on time.
Humpback whales breed, calve and nurse
in Hawaii in the winter, then migrate to the
Gulf of Alaska and other areas in the North
Pacific to feed primarily in the summer.
Individual whales come and go throughout
the season, although generally the months
with the highest numbers of whales are
January, February, and March.

On a clear, wind-free day, the marine
mammal’s exhalation, or “blow,” rising up
to 20 feet tall can be seen from miles away.
When they launch their enormous bodies
out of the water, known as “breaching,”
their triumphant return to sea sounds like sonic booms sweeping across the ocean’s surface. Hawaii’s first reported whale announced its arrival with a series of repeated breaches, much to the great cheers from some lucky on-lookers aboard a nearby tour boat.

While the physical size of humpback whales is, well, big, much of their life is elusive. Adults can hold their breath for up to 45 minutes and dive several hundred feet deep, making it challenging for researchers to study them. More sophisticated technology, however, is helping reveal insights into whale life to create a more robust understanding of this marine mammal. This advanced technology comes at a good time as recent reports indicate fewer, and possibly thinner, whales are migrating from their foraging grounds to their breeding grounds in Hawaii. 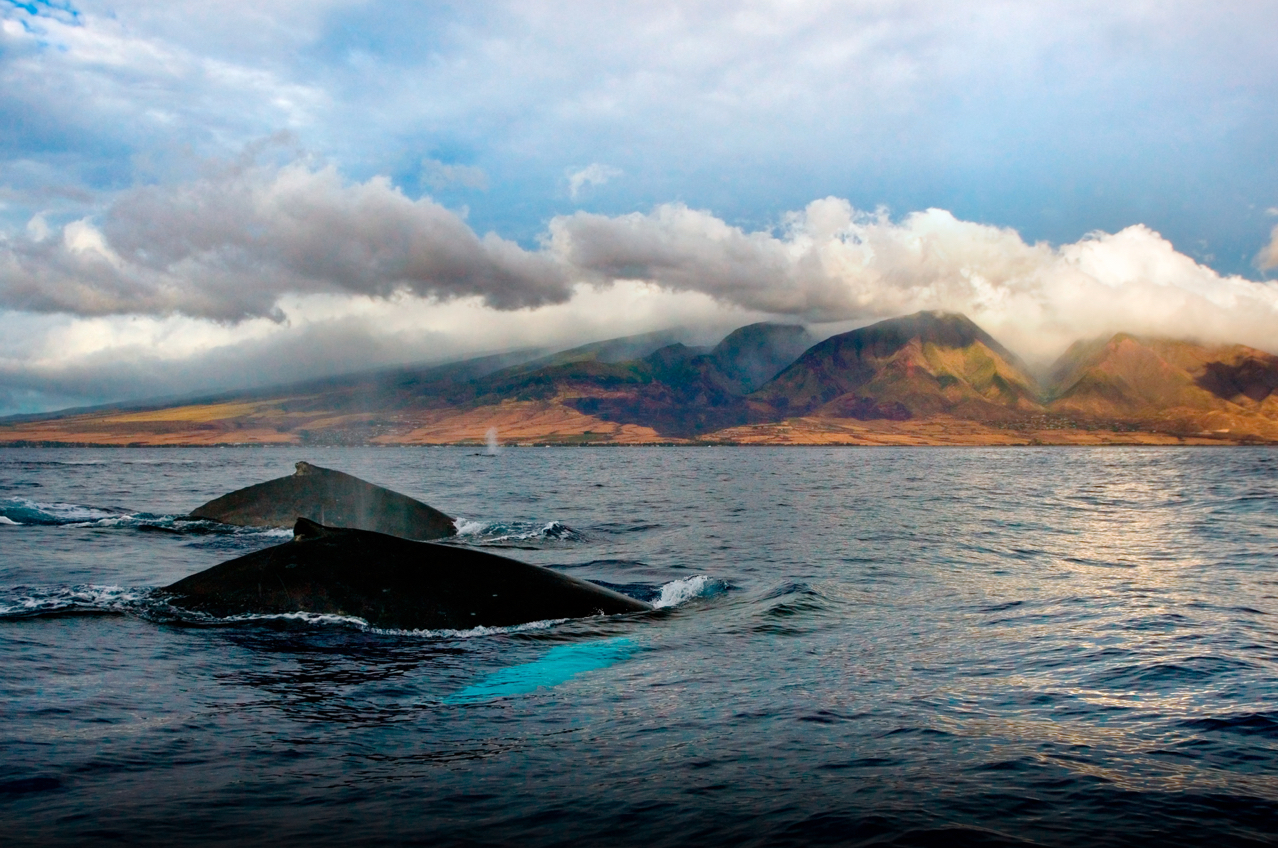 Above: No matter where you spot them, these gentle giants are a spectacle to behold.

What sets humpbacks apart from other whales is their song, a series of vocalizations, second only to humans in complexity. “Humpback whale songs are kind of otherworldly,” said Lammers in an episode of “Changing Seas,” now available for viewing online (https://www.changingseas.tv).

For decades, Lammers and other researchers have used underwater acoustical recorders to study humpback song. What they’ve learned is that only the males sing and they only do so during the breeding season. What’s more their song changes throughout the breeding season. Then, the next season, the song picks up where it left off and continues changing throughout the season. Lammers and others are testing theories related to fitness and hierarchy of male whales.

Earlier this fall, humpback researchers in the United Kingdom published a scientific study suggesting whale song “themes” are unique to place; thereby allowing researchers to identify a whale’s travels based on his song. 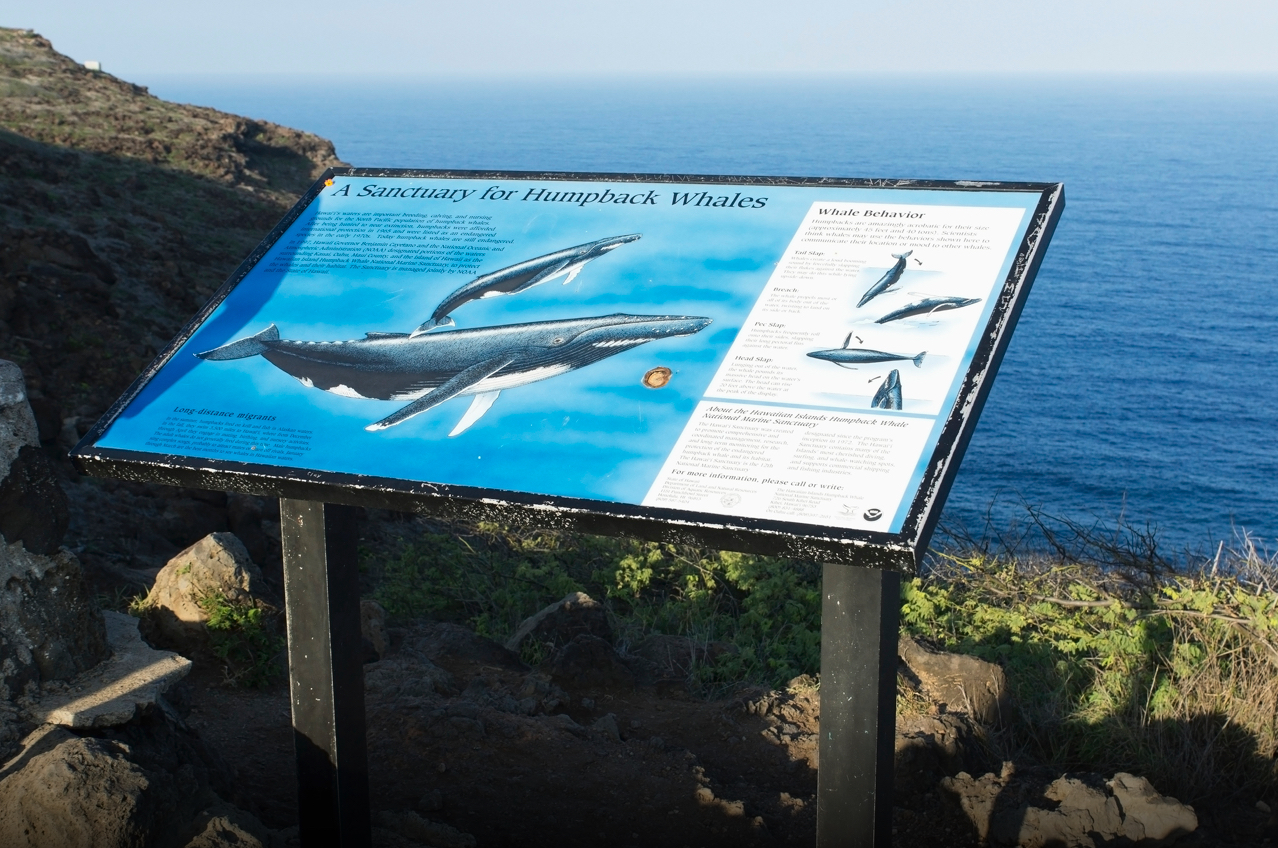 Above: The Makapuu Lighthouse Trail is an ideal viewing spot on Oahu.

Scientists have long used the showy surface
behaviors of humpback whales to catalogue
them. Humpbacks make enormous
splashes slapping their long pectoral fins,
breaching, and performing an aggressive
move known as a peduncle throw, in which
whales use the peduncle muscle above its
tail to throw its tail sideways. All this
splashing helps scientists find their
research subjects in a big ocean. Using
photography, scientists have catalogued
some 7,000 individual whales based on
the unique pigmentation pattern of the
underside of their flukes—their tails.

But beyond singing, little is known about
humpback whales’ underwater behavior.
How often do males sing? How much time
do they rest? What do whales do at night?
How do they respond to acoustic
disturbances, like vessel traffic? That’s where a high-tech and expensive device with the simplistic name of a “sensor tag” comes in handy. Using suction cups, sensor tags are attached to whales. The tags stay attached for hours and measure sound, dive behavior, and three-dimensional movement. Once they pop off, they are designed to float and emit a VHF signal. Researchers use the signal to find the tag, scoop it up, and retrieve the tag’s data.

Until an international moratorium on whaling, in effect since 1985, humpback whales around the globe faced the very real threat of extinction. It’s estimated that the North Pacific humpback whale population had been reduced to less than 10% of its pre-commercial whaling abundance of 15,000 individuals. By 2006, a population study revealed an estimated 10,103 (excluding calves) of the North Pacific population migrated to Hawaii. Each year, the numbers continued to grow, and based on this study, in 2016, humpback whales were de-listed from its endangered status. And immediately, things started to change. 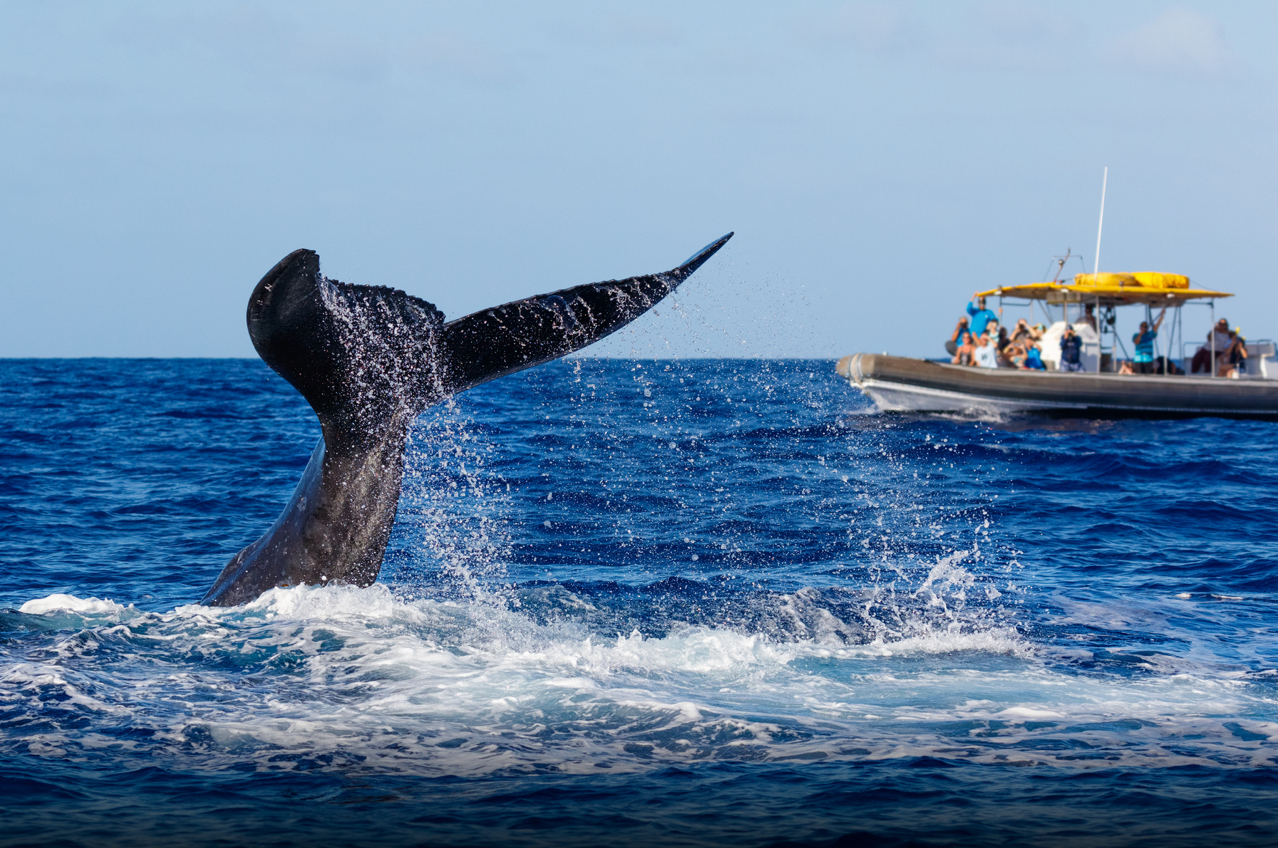 Above: A whale tale up close makes a whale watching boat excursion so worthwhile.

That same season, for the first time in many, reports echoed across Hawaii of a decrease in the numbers of whales migrating to Hawaii for their breeding season. In Alaska, observations of skinny whales were noted, as were increasing numbers of humpbacks “over-wintering” in Alaska. Too, humpbacks seemingly disappeared from their traditional foraging grounds and appeared in non-traditional places.

In Hawaii, researchers have generally focused their efforts in waters around Maui Nui (Maui, Molokai, Lanai, and Kahoolawe). However, beginning with the 2018-2019 breeding season, Ecological Acoustic Recorders (EARs) have been installed in sanctuary waters off Oahu and Kauai, as well as, in two locations in Papahanaumokuakea Marine National Monument, the islands, islets, and atolls continuing northwest of the main Hawaiian Islands.. 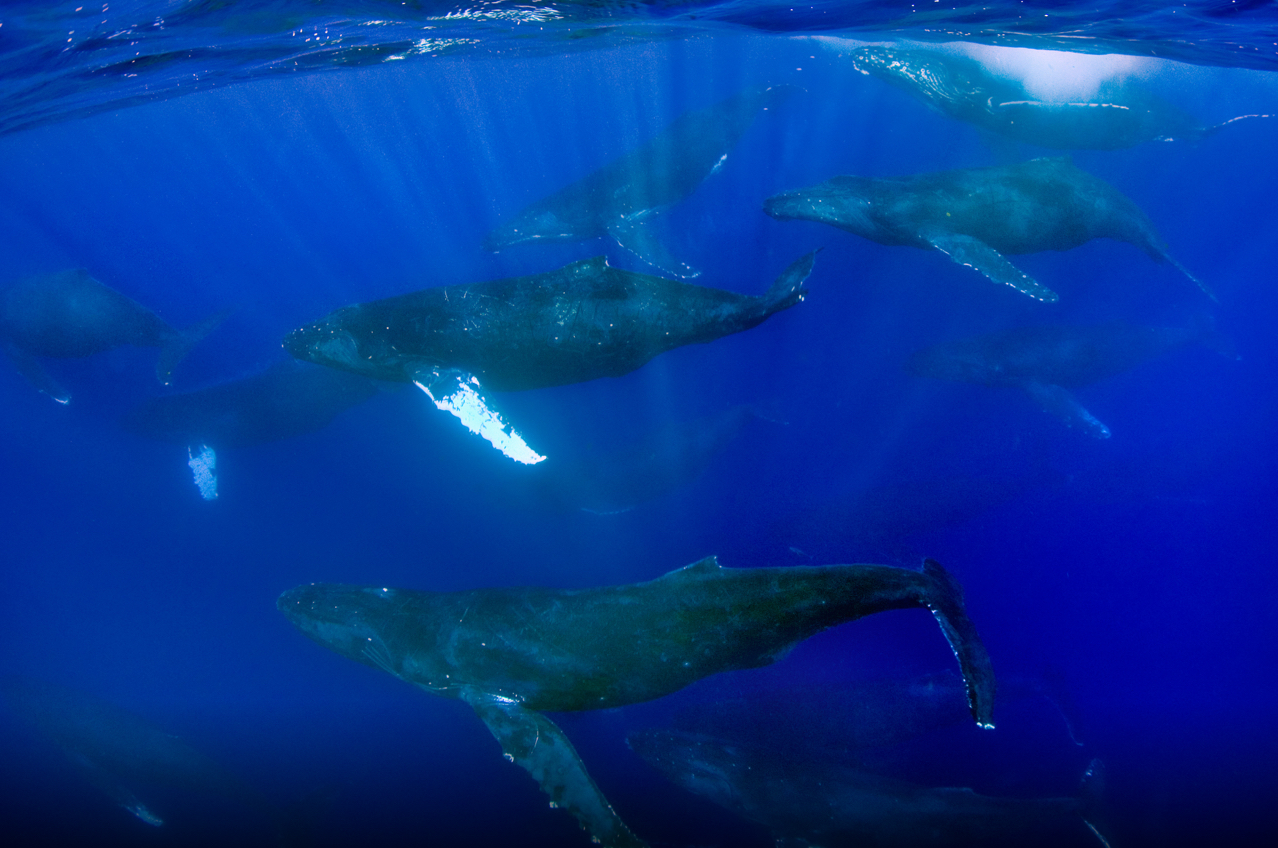 Above:In their element, the humbpack whales glide gently through the sea.

These EARS instruments are stationary devices secured to the ocean substrate and have to be retrieved periodically to download data off their storage drives and re-outfit with new batteries.

In addition, robotic devices are being employed to survey non-traditional gathering areas of humpbacks. Known as “wave gliders,” these autonomous devices consist of a surfboard-sized surface platform tethered to an underwater “sub.” The surface float includes a control unit, solar panels, cameras, and a communication system. The sub propels the whole kit through the water by transforming vertical wave movement into forward motion. Satellite technology is used to download surface and underwater photographs, as well as, short recordings.

“They’re not ‘supposed’ to be there,” said Dr. Jim Darling, Whale Trust biologist, in a statement about the wave glider’s 100-day survey from Hawaii to Mexico and back. Humpbacks are typically known to assemble in specific near-shore, relatively shallow, breeding grounds in Mexico and Hawaii. But the wave glider picked up their calls mid-ocean, halfway between humpback’s known near-shore gathering grounds. “But then no one has looked in these more remote, offshore areas either.” 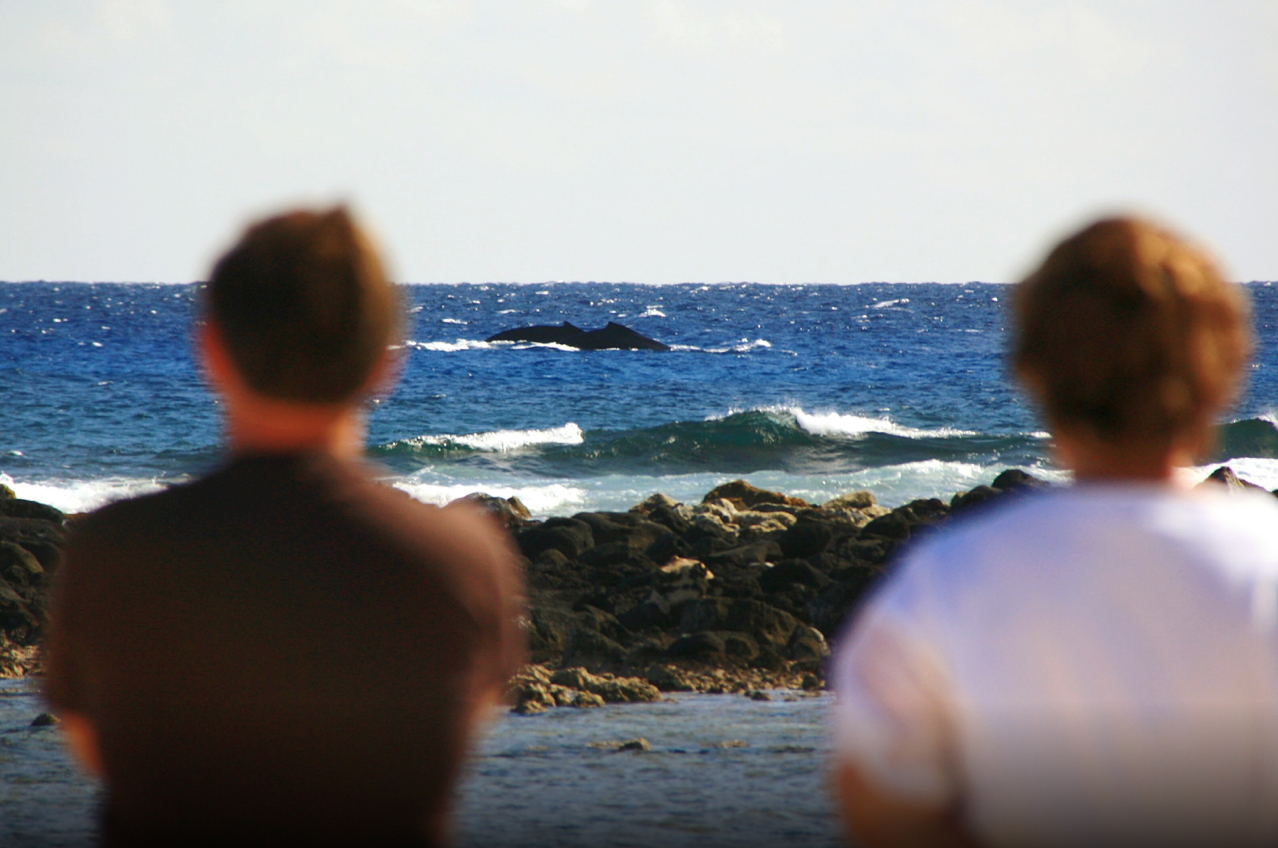 Above: Spectactors on land enjoy the active display by this pod of humpback whales passing by.