Above: Outrigger Canoe Club’s junior crew sprints through the finish line to complete its 41-mile trek from Molokai to Oahu at the 2014 Molokai Hoe.

In what is often referred to as the “Super Bowl” of outrigger canoe paddling, the 63rd Annual Hawaiian Airlines Molokai Hoe sets a grand stage for the sport’s world championship.

When: Sunday, Oct. 11, 2015
Where: Hale O Lono Harbor, Molokai, to Waikiki Beach, Oahu (41 miles)
Race Time: Race is scheduled to begin at 8 a.m. with the top finishers expected to finish around 12:45 p.m.
Watching the Finish: The best place to catch the action is on the crescent-shaped beach fronting the Hilton Hawaiian Village. Spectators can watch the race’s finish (marked by floating buoys just off shore) and may also greet crews as they come to shore.
Recent Champions: Tahiti’s Shell Va‘a claimed eight consecutive Molokai Hoe victories from 2006-2013. In 2014, Tahitian crew EDT Va‘a, which is named for an energy company, upset Shell to win the title last year. Lanikai was the last locally-based crew to claim the men’s Molokai-to-Oahu hardware in 2005.
Record Time: Shell Va‘a set the event record time of 4 hours, 30 minutes and 54 seconds in 2011.

On Sunday, Oct. 11, more than 1,000 paddlers and supporters will make their way to the 50th State for the 41-mile race from Hale O Lono Harbor, Molokai, to Duke Kahanamoku Beach fronting the Hilton Hawaiian Village in Waikiki. This year’s collection of talent is expected to include in excess of 100 crews featuring paddlers from around the globe. Last year, athletes from Tahiti, Australia, Japan, France, Hong Kong, Washington, California, Pennsylvania, New York and all Hawaiian Islands except for Lanai participated in the channel crossing.

Na Koa O Kona of the Big Island and Team Primo of Maui represent some of the local favorites poised to take home the prestigious Molokai Hoe hardware, however, crews from Kailua, Lanikai, Hui Lanakila, Hui Nalu and Outrigger Canoe Clubs have also showed promise during both the summer regatta sprint season and the long-distance season.

“We’re all from Kona, live in the same area and raised our kids together,” said Hauanio, who also serves as the crew’s captain. “It’s one big family. We’re trying to represent where we come from and be more consistent.”

Team Primo, which won the previous four Henry Ayau events prior to Na Koa’s recent surge, did not participate in the Oahu race. Instead, Primo—as well as a host of other local crews expected to compete in the Molokai Hoe—raced in the Pailolo Challenge, a 25-mile race between Maui and Molokai, on Sept. 19.

Team Primo set the record for the fastest time by a Hawaii competitor at the 2011 Molokai Hoe (4 hours, 42 minutes and 59 seconds). The squad was formed in 2009 with the primary goal of stopping Tahiti’s Shell Va‘a, the winners of eight consecutive Molokai Hoe races from 2006-2013.

The Hawaii-based crews are expected to chase teams from Tahiti, which have combined to win nine consecutive Molokai Hoe titles. Shell Va‘a, which set the Molokai-to-Oahu record in 2011 (4:30:54), set the bar for Tahitian clubs, while fellow countrymen from EDT Va‘a—which is named after an energy company—upset Shell to win the title last year.

Lanikai, one of Oahu’s well-known clubs from Kailua that is rich in paddling history, was the last local crew to claim the men’s Molokai-to-Oahu hardware in 2005. 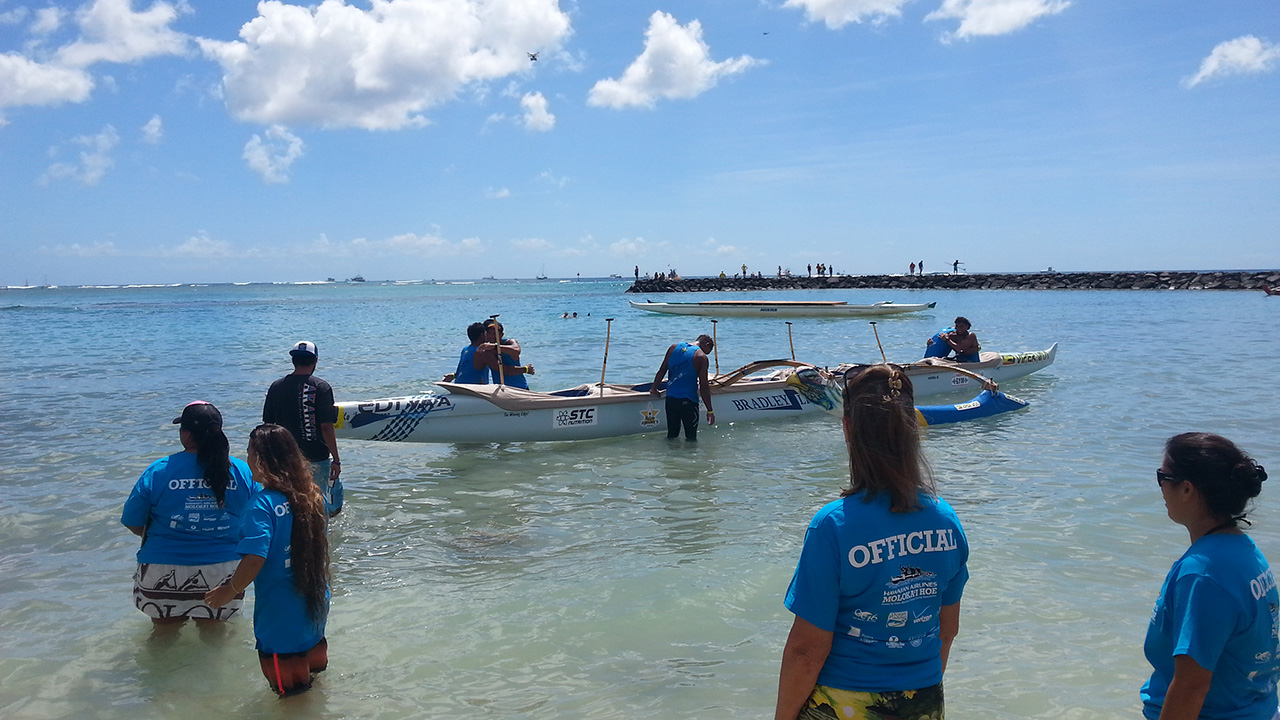 Walter Guild, one of the Molokai Hoe’s most successful competitors, was honored on Sept. 23 as part of the 2015 class inducted to the Outrigger Duke Kahanamoku Foundation Hawaii Waterman’s Hall of Fame.

Guild is synonymous with success on the ocean as the avid waterman, canoe builder and event organizer competed in 17 Molokai Hoe events and was part of eight winning crews during that span. He was also part of the Outrigger Canoe Club crew that won the Molokai Hoe in a vessel named Kaoloa, the last koa canoe to carry a winning team, in 1990. In the years since, more agile fiberglass canoes have been used to trim race times, however, a koa canoe division still exists within the prestigious race.

Guild was joined in the Waterman’s Hall of Fame class by: legendary late swim coach Soichi Sakamoto who mentored multiple Olympic medal-winning competitors; Duane DeSoto, a former world longboard surfing world champion who, in 2008, founded a non-profit organization dubbed Na Kama Kai to help educate children about the ocean; and Joey Cabell, one of the top surfers of the 1960s who was part of the Duke Kahanamoku Surf Team and served as one of the sport’s ambassadors and well-respected all-around competitors. 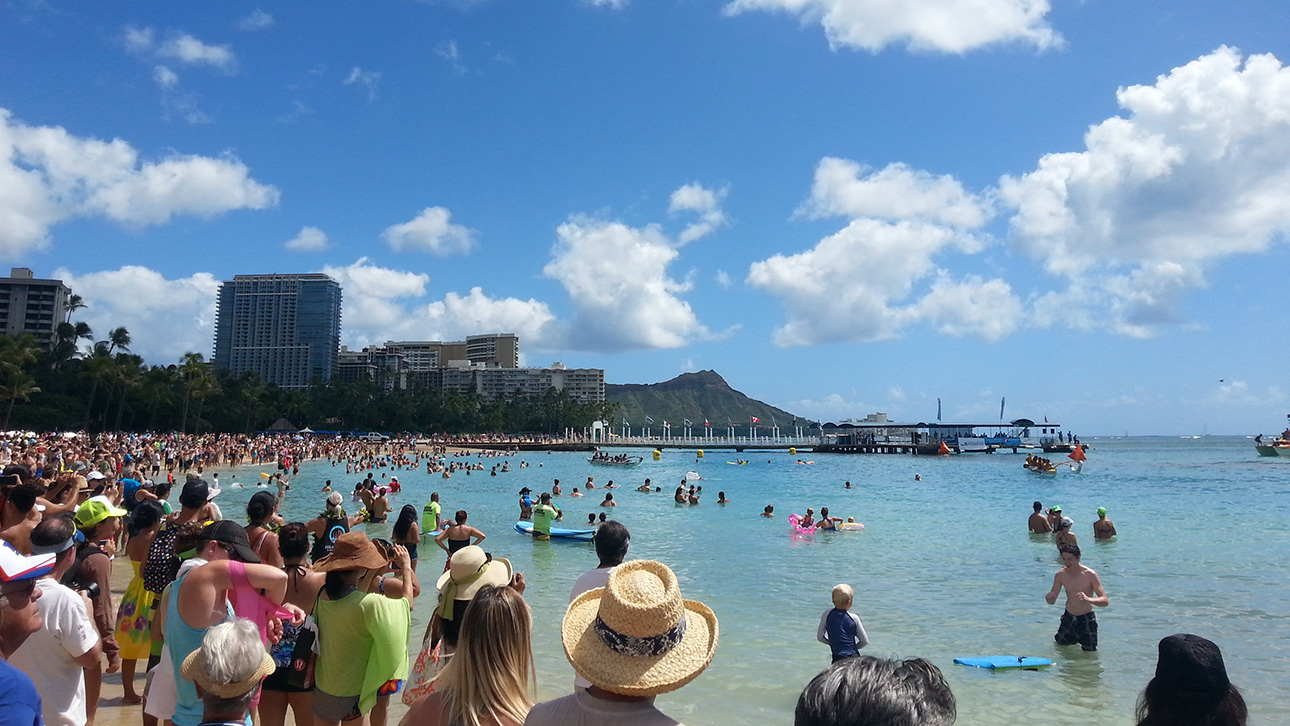 Above: Thousands of onlookers, friends, family members and team supporters gather along Duke Kahanamoku Beach in Waikiki to welcome more than 100 crews competing in the 2014 Molokai Hoe.

As paddlers prepare for the Molokai Hoe, they must also take into consideration the rigors presented by the Kaiwi Channel—translated from native Hawaiian to mean “Channel of Bones” due to its 2,300-foot depth and its penchant for hosting harsh weather conditions.

As proof of how treacherous conditions in the Kaiwi Channel separating Molokai and Oahu can be, the women’s version of the marathon paddling event was canceled on Sept. 26 a day before the race due to concerns about potentially dangerous wind and wave conditions. The Hawaiian Airlines Na Wahine O Ke Kai, the women’s Molokai-to-Oahu race, was called off after race committee members determined that the 41-mile crossing too dangerous for paddlers, escort boat personnel and water officials to endure.

The cancelation, which many paddlers appreciated because their safety was of prime concern, was just the second such termination of both the men’s and women’s Molokai-to-Oahu races. The Na Wahine O Ke Kai  was also canceled in 1980—the event’s second year in existence—due to 30-foot waves and gusting winds.

“If we were to have raced and lost somebody, you can never bring a life back…their lives are just too important,” said Na Wahine O Ke Kai race director Hannie Anderson just hours after making the tough call to terminate the race before it was to get underway the next morning. “Paddlers came up to me after we made the decision and thanked us for keeping their safety in mind. It was a hard call to make.”