Above: Team Bradley takes a breather after capturing the Na Wahine O Ke Kai crown in 2013. The crew set the event record of 5 hours, 22 minutes and 5 seconds in 2008.

As news of kumu hula Leina ala Kalama Heine's passing on Sept. 9 spread quickly throughout Hawaii, tears of sadness were shed by those who had been touched by the warmth and wisdom the memorable teacher and performer shared with the world in her 75 years.

However, those tears turned into the joyful variety as Heine's vast ohana — including relatives, longtime friends and pupils—reflected on the memories that the woman known fondly as “Aunty Lei” and “Aunty Ala” had created and will be remembered by for generations to come.

The outrigger canoe paddling community will have an opportunity to honor Heine while thousands of paddlers, supporters and spectators participate in the 37th Annual Hawaiian Airlines Na Wahine O Ke Kai on Sept. 27. The 41-mile race from Hale O Lono Harbor, Molokai to the beach fronting the Hilton Hawaiian Village in Waikiki gets under way at 7:30 a.m. with the first canoes expected to finish around 1 p.m.

What: The most prestigious long-distance outrigger canoe race in the world for all-female crews

Race Time: Race is scheduled to begin at 7:30 a.m. with the top finishers expected to finish around 1 p.m.

Watching the Finish: The best place to catch the action is on the crescent-shaped beach fronting the Hilton Hawaiian Village. Spectators can watch the race’s finish (marked by floating buoys just off shore) and may also greet crews as they come to shore.

Heine will surely be missed at the race as she had been responsible for providing the event’s opening pule (prayer) on the beach on Molokai as well as delivering oli (chants) for the top crews as they crossed the finish line. While her low, booming voice is irreplaceable, Heine's spirit and presence live on through family members who participate annually in the highly-anticipated competition.

When Rose Lum first paddled across the Kaiwi Channel, there was no way she could have fathomed the magnitude of the accomplishment. Lum, who is known within the paddling community and amongst friends and family as “Auntie Rosie,” is Heine's sister and looks forward to honoring her sibling at the monumental race. While she currently serves as a race official and can be heard at the finish line each year announcing crews as they come in, Lum's effort as one of the sport’s pioneers can be traced back more than four decades.

“There are a lot of things that make this race special and sad,” Lum said. “You look back and go ‘Wow, I’ve been here for 40 years’ and my sister, who always chanted as the first three crews came in, to not have her here for this one … her legacy will live on. 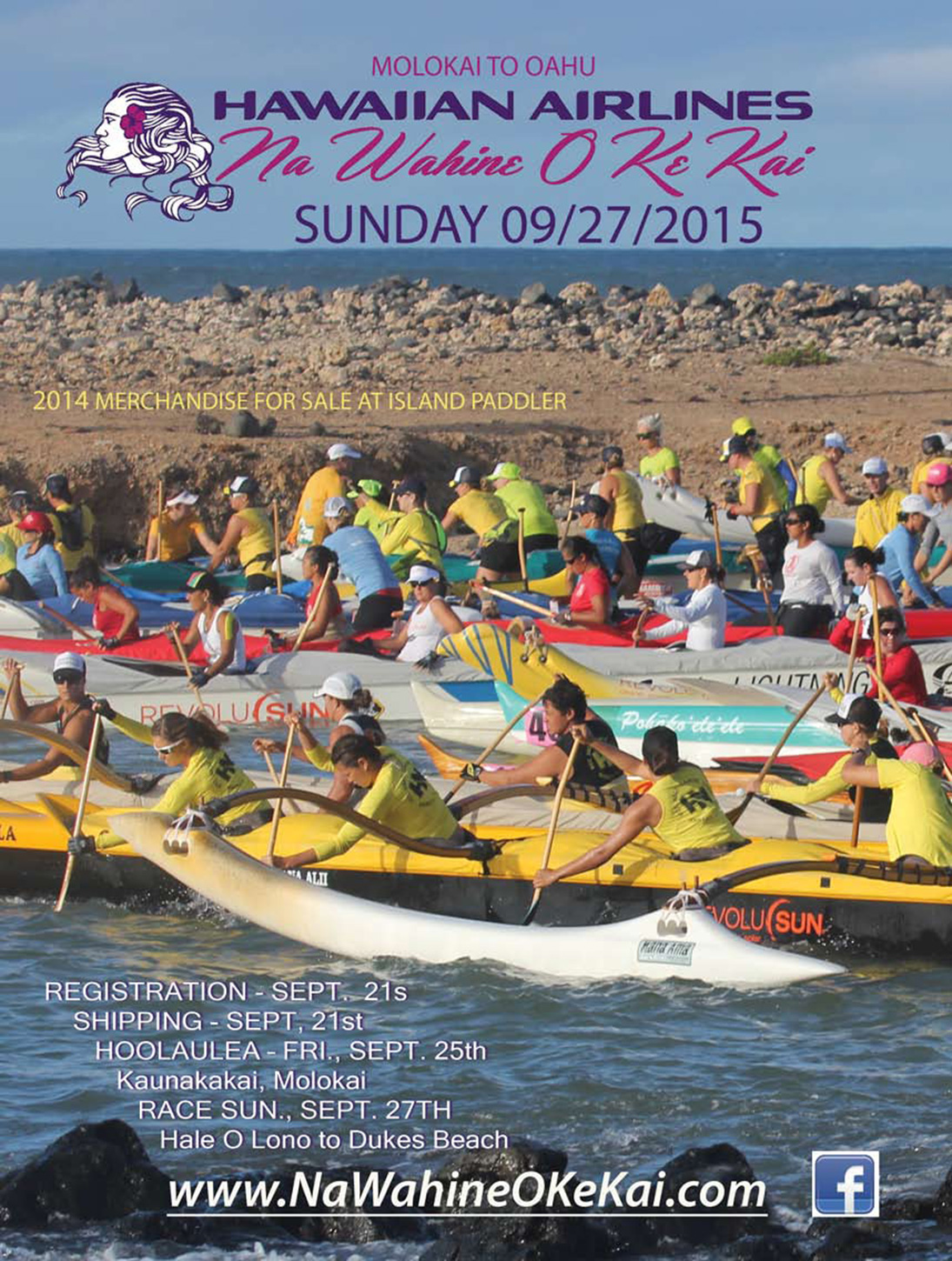 “Death is a part of living, and we have to learn how to live. When somebody passes on, you must continuously live and remember what that person contributed to life. The ocean is so cleansing, and the Hawaiians have always believed that the ocean is very spiritual, and of course, in Hawaii we’re surrounded by water.”

“The ocean is so cleansing, and the Hawaiians have always believed that the ocean is very spiritual, and of course, in Hawaii we’re surrounded by water.”

Lum, along with 17 other paddlers from the Waikiki Surf, Outrigger, Lanikai, and Kailua canoe clubs, challenged an 18-woman crew from Healani Canoe Club in an October, 1975 race that became, unofficially, the first crossing between Molokai and Oahu by all-female teams. Forty years later, the Na Wahine O Ke Kai has evolved into the world championship of women's long-distance outrigger canoe paddling. According to race director Hannie Anderson, when the first official race took place on Oct. 15, 1979, there were 17 crews in the field. This year’s collection of talent is expected to include more than 60 crews featuring paddlers from Hawaii, California, and Australia.

“It’s something exciting every year,” said Anderson, the race's director since its inception. “Every single year it feels like the first one. It's exciting to see the women (on race day), and I always get tears in my eyes.”

Mahealani Botelho — Lum’s daughter and Heine's niece—will yet again get the chance to participate in “the journey” taken by her mother four decades ago. Botelho is part of Team Bradley, which is named after canoe builder Sonny Bradley who crafted and maintains the team's racing canoe, and constitutes an all-star team of paddlers from across the state. The Bradley crew represents one of Na Wahine O Ke Kai's most successful participants, having won the race in eight of the last 10 years, including a stretch of six consecutive victories from 2005 to 2010. Team Bradley still holds the event record time of 5 hours, 22 minutes, 5 seconds, set in 2008. This year the crew looks to reclaim the title from reigning champion Waikiki Beach Boys.

“It gives me chicken skin, this means the world to me,” said Botelho. “My mom was the first to cross the channel, and she’s still with me. It's such a wonderful honor and words can’t express how special it is to be a part of something my mom and other kupuna (elders) started. It's one of my family's cultural practices, and every time I get in the waa (canoe), I think of those who came before me and all those who will follow.” 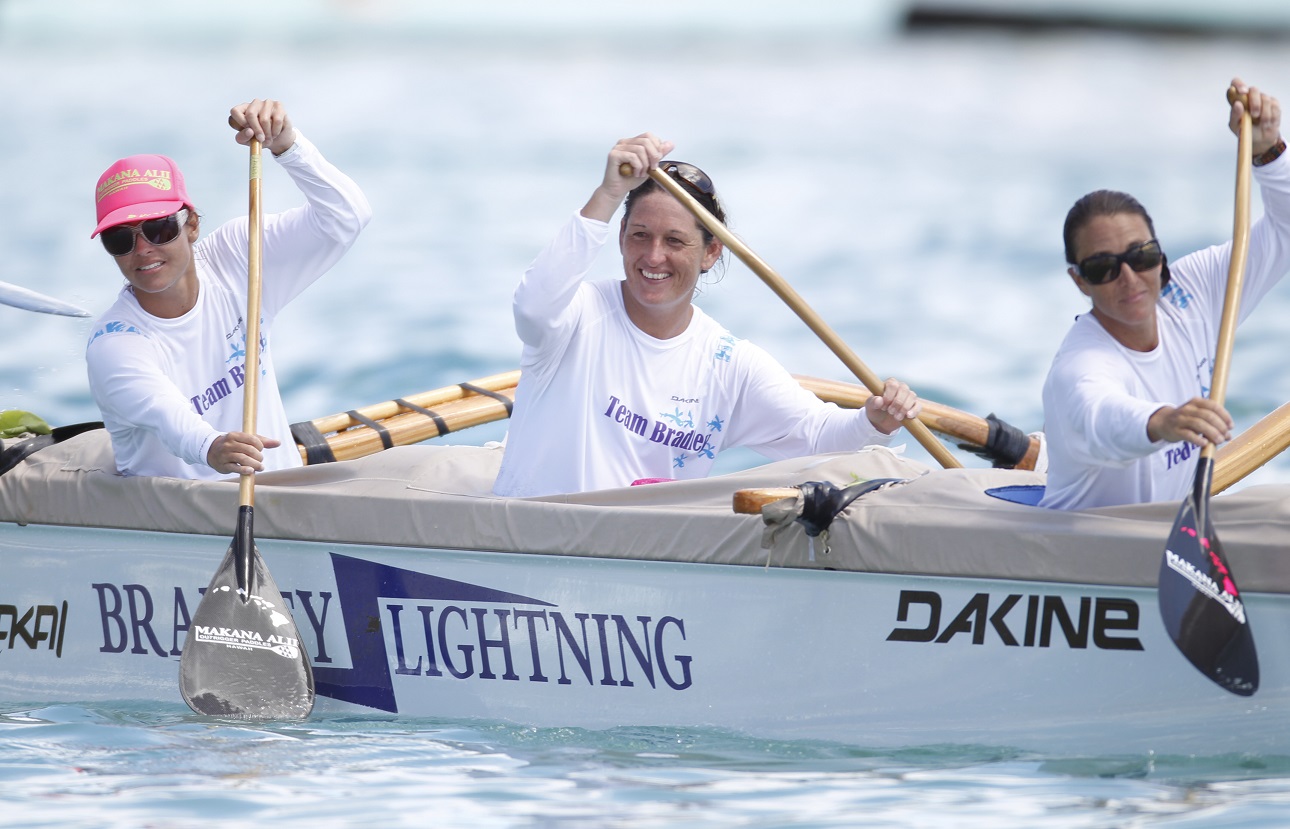 Above: Team Bradley paddlers, from left, Lauren Spalding, Mahealani Botelho and Andrea Moller paddle in to shore after finishing first in the 2013 edition of Na Wahine O Ke Kai in the waters off Waikiki Beach.

For longtime crew members like Botelho, Team Bradley's mission extends further than simply racing for victories and competing amongst the world’s elite.

“The beautiful thing is that Team Bradley stands for the perpetuation of our culture. Perpetuating all the virtues of being Hawaiian and representing our culture is coming full circle for us,” Botelho said. “We’re living up to what we believe in and what we stand for.”

The Na Wahine O Ke Kai also affords Botelho an opportunity to honor her aunt as one of the event's lasting legacies.

“My aunty lives in me, I’ve been hearing her oli since before I was even paddling,” Botelho recalled. “That voice is something that can't leave me and I want to honor her in all that I do, especially in the waa.”

From her familiar perch on the pier looking down at the Na Wahine O Ke Kai finish line, Lum will have the chance to see her daughter take the next step in carrying on the family tradition.

“It's humbling for me,” Lum said of Botelho’s continuation of the family legacy. “I think it’s wonderful that she loves the sport. I paddled with Kelly Fey (and helped mentor her), and now she's paddling with and helping to coach my daughter. It's just awesome.” 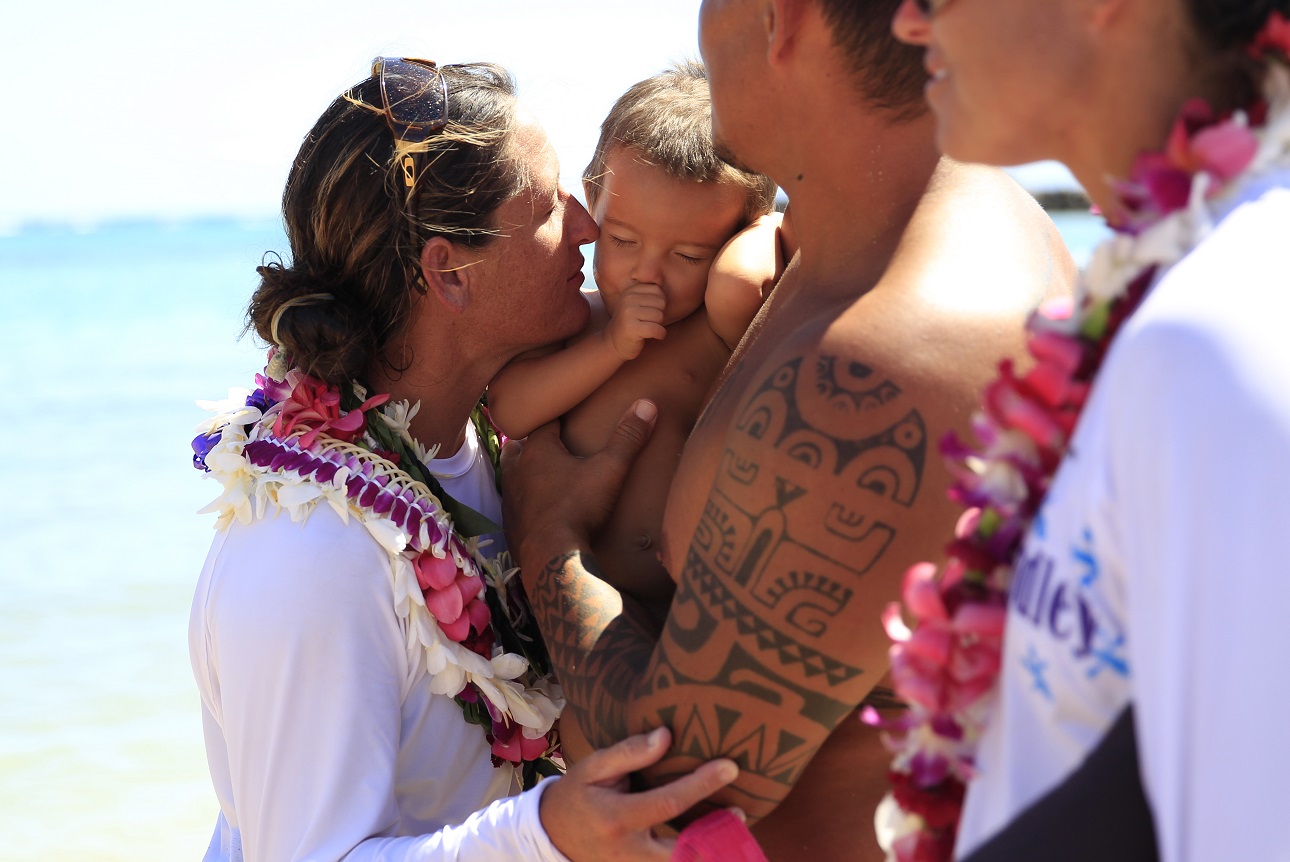 Above: Mahealani Botelho celebrates with family after she and Team Bradley secured the Na Wahine O Ke Kai championship in 2013.

Lum alluded to Fey, who helped build Team Bradley's dynastic run as a paddler and now pitches in to coach the crew, both as a six-woman team and individually with various workouts. Following Team Bradley's runner-up finish to Waikiki in the E Lau Hoe race on Sept. 13 (a 32-mile event from Maunalua Bay in Hawaii Kai to Nanakuli Beach), Fey reflected on the full-circle experience paddling has created over the years.

“I’m still hurting right now … I coached with Rosie and also paddled with her, and now being with Mahealani, she's a true treasure,” Fey said. “It's like she was born in the canoe. The spiritual factor of being in the boat with these girls is very important.

“I think Mahealani really has an extra drive to be in the canoe now, with everything that’s happened. She’ll have Aunty Lei [Kalama Heine] with her on her shoulder. I know Aunty Lei will be with all these ladies during the race.”