Poi is a traditional side dish in Hawaiian diets, made from the cooked corms of kalo (taro).

Hawaii has long had the reputation for being a cultural melting pot. Over the centuries, diverse peoples made their way to these isolated islands and contributed to our unique lifestyle, most evident, perhaps, in our cuisine. The food and flavors here are an east-meets-west melange, where shoyu and sugar meet macaroni and mayonnaise, and bed down on a scoop, or two, of sticky rice. But there are a few foods that are uniquely Hawaiian, and one of them is poi.

Poi is a gray-to-purple, pudding-like dish that locals will likely associate with special events and celebrations, like keiki first-birthday luaus, graduation parties, and weddings, where it’s often served with kalua pig, lomi lomi salmon, and chicken long rice, to name a few.

If you are lucky — because poi flies off the store shelves as quickly as it comes in — you might enjoy a bowl of poi with dinner a few nights a week; my grandma always had a plastic-wrapped, pyrex bowl of poi sitting and souring in the middle of her dinner table. We ate it with everything, from beef stew and kalua pig and cabbage, to hot dogs and spam. It didn’t matter what the dish was, so long as it was salty. Poi is best with salty food. 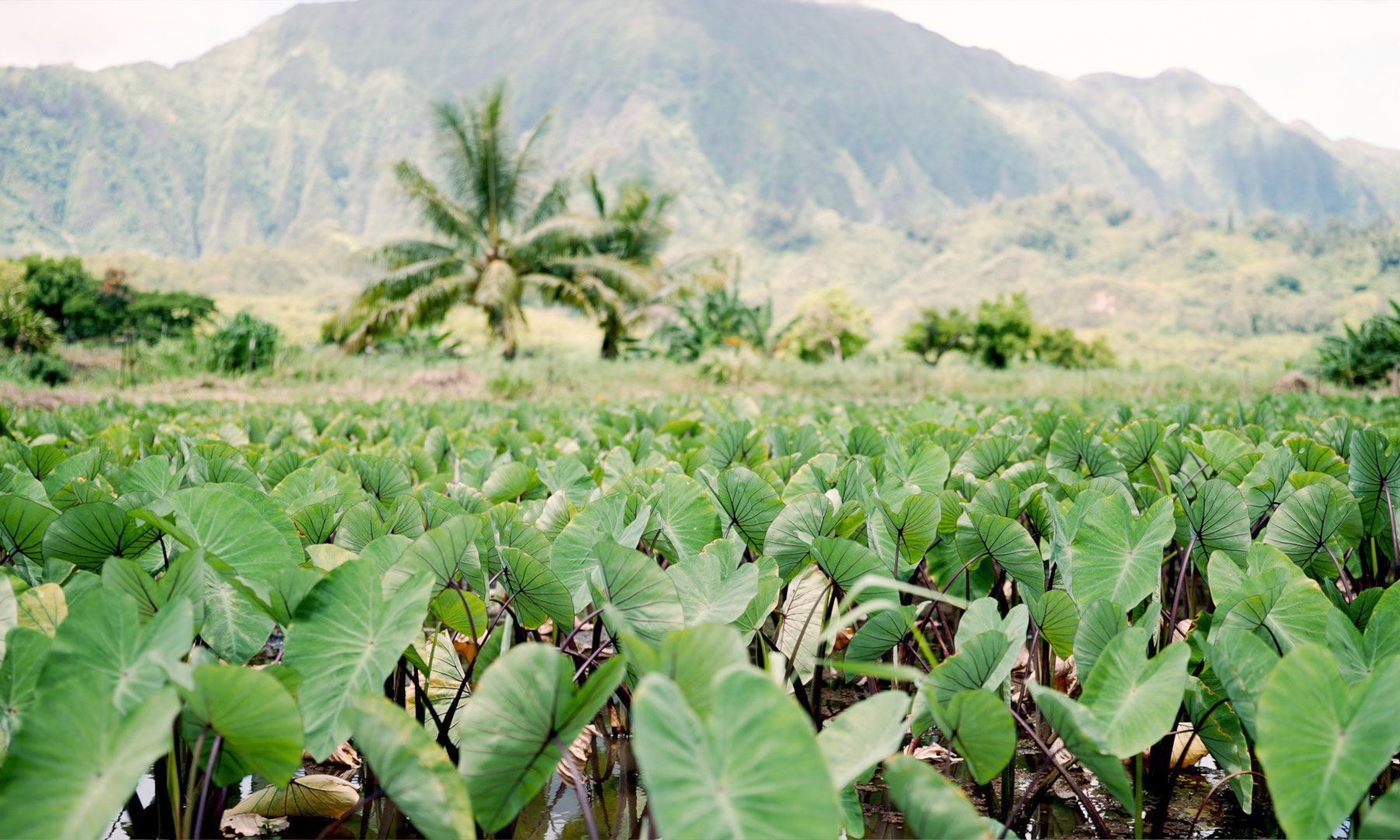 Taro grows well in water-filled paddies. Volunteers at Oahu’s Kakoo Oiwi will get muddy in the kalo loi (but that's part of the fun).

Made from the corm, or root, of the taro (kalo) plant, poi was both a staple food and a commodity for Hawaii’s earliest settlers. After it’s cooked, the corm is mashed into a paste and water is added to it until the paste reaches the desired consistency. Poi’s consistency can be quite fluid (3-finger poi) but it can also be thick (2-finger poi) and doughy (1 finger poi), depending on how much the preparer wants it to stretch. 1-finger poi is a rich man’s poi, while 3-finger poi is a poor man’s poi. When fresh, poi has a sweetness that turns sour as the days pass.

The early Polynesian settlers had a special relationship with kalo, as the plant’s origin story was related to the origin story of the Hawaiian people. As the story goes, Wakea (Sky Father) and Papa (Mother Earth) had a daughter named Hoohokukalani (The making of stars in heaven).

Hoohokukalani grew and later conceived a child with Wakea, but it was stillborn. They named him Haloa (Eternal breath), and from the soil in which he was buried grew the first kalo plant. Later, Hoohokukalani had another son for whom they named Haloa, after the son they’d lost. This second child grew to be a healthy child and was the first Hawaiian.

It is said that the connection between Hawaiians and Haloa is sacred. To be without kalo as a source of sustenance is to suffer a spiritual death. The story of Haloa reminds us of our ties to the natural world. 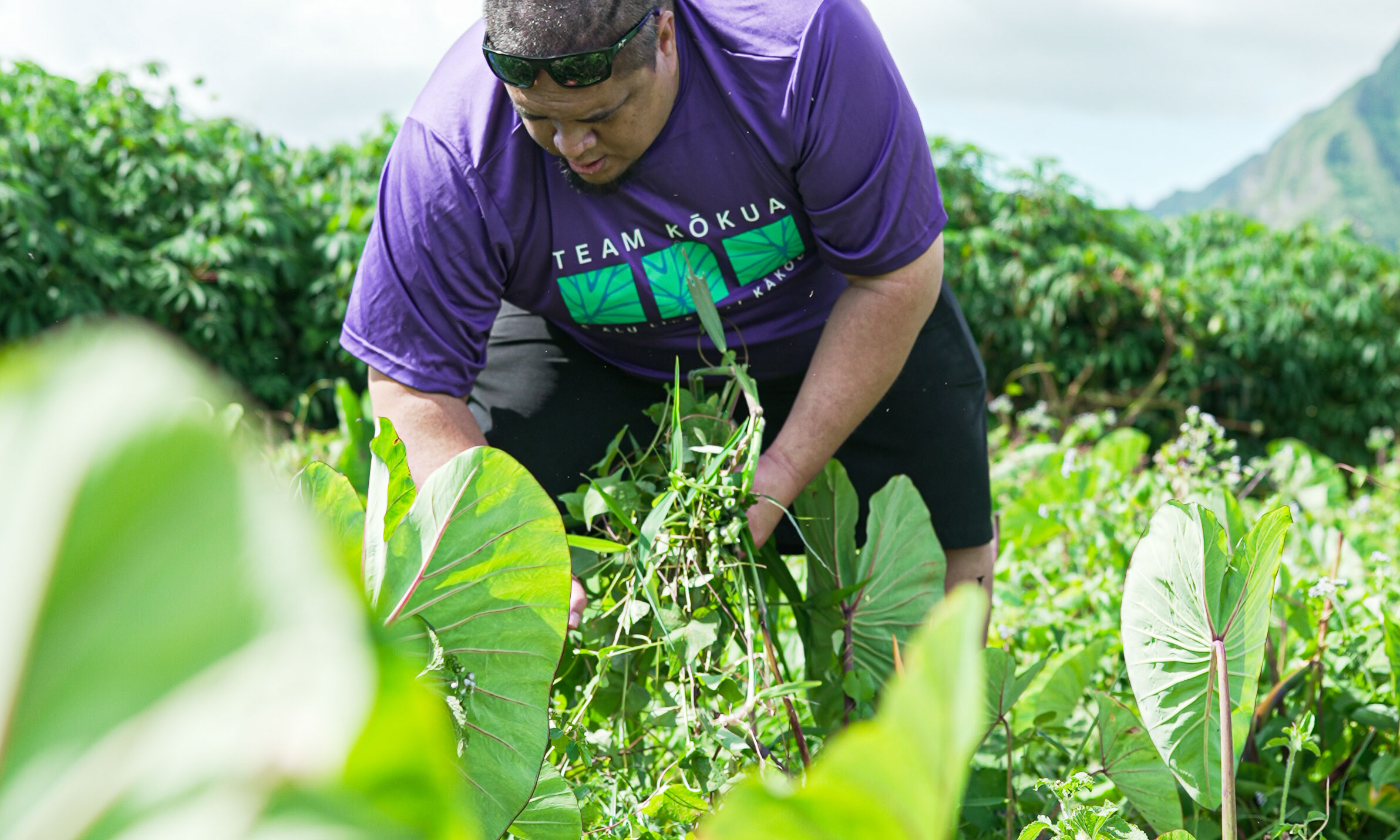 Kakoo Oiwi (Oahu)
46-406 Kamehameha Hwy
Kaneohe, HI 96744
It is in the spirit of restoring the cultural connections between the people and the land that community-based, non-profit organization Kakoo Oiwi has devoted their energy. Based in the ahupuaa (land division) of Heeia, moku of Koolaupoko, windward Oahu, the organization has restored more than 400 acres of wetlands to its agricultural and ecological productivity since 2010. Additionally, Kakoo Oiwi offers educational and service opportunities to the community, through community work days and cultural workshops. There is no better way to understand our connection to nature, and to kalo, specifically, than by volunteering to clean or restore a loi (irrigated kalo patch). It’s hard, muddy work, but the spectacular views of the Koolau mountains and the spiritual connection of the work make it an easy trade.

Waiahole Poi Factory (Oahu)
48-140 Kamehameha Hwy
Kaneohe, HI 96744
About five miles north from Kakoo Oiwi is the storied Waiahole Poi Factory, an old ramshackle wooden building just off the highway, a must visit for poi newbies just as much as it is for aficionados. Built in 1905, the building operated as a poi factory for over 70 years before it was bought and revitalized by its current owners in the 1970s. For newbies, it’s a great place to try the traditional dish because it’s freshly made every day, which means you won’t run the risk of tangy, sour, fermented poi for your first tasting. Of course, you’re going to have to pair it with an entree from their traditional Hawaiian food menu. Not an easy task, but you can never go wrong with kalua pig and laulau, which consists of salted meat wrapped in kalo leaves and cooked in an imu (underground oven) or in a steamer. Room for dessert? The Sweet Lady of Waiahole, named after the Hawaiian song, is a scoop of coconut ice cream over warm kulolo, which is a kalo and coconut pudding.

Hanalei Poi (Kauai)
Available at stores across Hawaii
Traditionally, if you wanted to pick up a bag of poi from the grocery store, it came in a one-pound, plastic bag that had been sitting on a store shelf. But when Hanalei Poi entered the game in 1999, they were looking to do things differently. Unlike other brands, the Kauai company’s poi was sold refrigerated in one-pound plastic tubs, which kept the product fresh. At the time, this was a game changer. Not only was the chilled poi fresher, but it was advertised as ready mixed, and you could eat straight from the tub. Bag poi required you to take it home and mix it in a bowl with water. Hanalei Poi was thick and sweet, and early on it gained a reputation for being a boutique brand of poi. 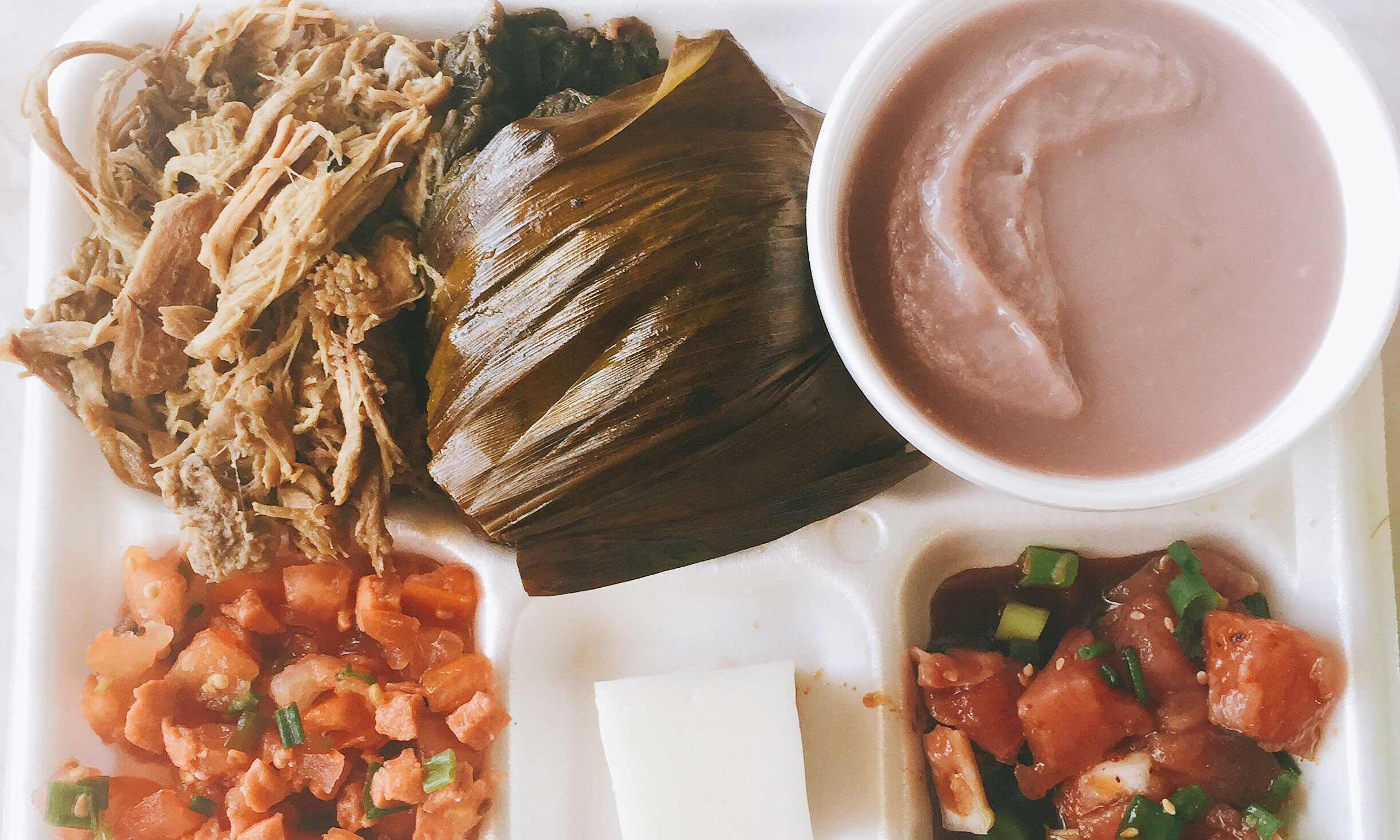 Poi is a seemingly modest dish. As described in a 2003 New York Times article, “if all the world's starchy foods had a party, you would probably find poi hanging back by the drinks, shy and self-conscious in its aloha shirt, trying to think of something to say to polenta.”

But it is so much more. It has been a staple of the Hawaiian diet for centuries, and it is embedded in Hawaiian cosmology as a reminder of our connection to nature and each other. When we celebrate someone or an event in the islands, poi is often part of the meal that symbolizes that celebration. And, it’s ono.