Some roads are notorious for their length. Some for their curves. Others for the bravery it takes to traverse them.

The historic Route 560 on Kauai’s North Shore offers a few curves, and, for some, the narrow road clinging to a cliff above the Pacific Ocean requires a bit of courage. But at only 10 miles, it doesn’t take all that much time to drive the two-lane, blacktopped road that starts in Princeville at the scenic overlook across the street from the Hanalei Fire Station and reaches its terminus at Ke'e Beach.

The payoff: Scenery to beat all. This is the Hawaii we dream of when we dream of Hawaii. There are no chain restaurants. No mega-resorts. No stoplights. Not even a gas station. We can thank Mother Nature for that. The craggy terrain is one reason this stretch of coastline is some of the most well preserved in the state.

You could drop the convertible top on your rental car and take in the sights — and luscious scents — of Route 560, said to follow an ancient Hawaiian footpath and added the National Register of Historic Places listings in Hawaii in 2004. Even allowing for stops at the eleven one-lane bridges crossing the rivers and streams flowing from the pleated mountains to the sea, the drive itself would only take an hour, tops.

But the area is a dense tropical forest draped in Hawaiian history and culture around every undulating bend in the road, and for that, we recommend a detour. Or ten. Bring your camera.

Starting at mile one, elbow the chickens begging for handouts aside at the overlook to take in the view of quilted greens of the Hanalei river valley encircled by a dramatic cascade of mountains that, in winter, is striated with waterfalls. These wetlands grow Hanalei’s famous, fresh taro, the number one ingredient in poi. 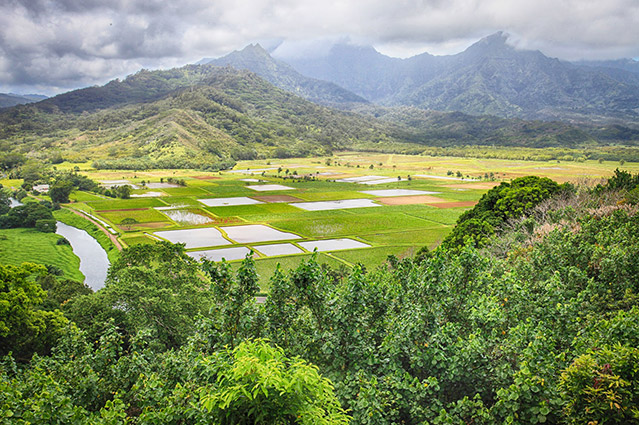 A one-lane bridge serves as a symbolic gateway into Hanalei as Route 560 drops several hundred feet in elevation to cross the Hanalei River, designated as an American Heritage River, on this historic bridge, built in 1912. Local etiquette is to allow five to seven cars to cross at a time.

Most vehicles continue right after crossing the river, but a left onto Ohiki Road will wind through a portion of the 917-acre Hanalei National Wildlife Refuge, established in 1972 to recover five of Hawai‘i’s endangered waterbirds, including the alae ula, or Hawaiian moorhen, credited with bringing fire to the Hawaiian Islands. The refuge is closed to the public but entry is allowed to access Okolehao Trail, a steep 2-mile hiking route that follows a ridge to 1,232-feet elevation and views of Hanalei Bay that will necessitate the use of the panorama feature on your camera. The original path was established during Prohibition when Okolehao, a liquor, was distilled from the roots of ti plants, some still growing beside the trail today.

Back on Route 560, two more miles will put you in Hanalei, a surfer’s town, with good stops for breakfast at Wake Up Café, lunch at Bubba’s Burgers, and dinner at the pricy but good Bar Acuda or the more affordable Hanalei Gourmet.

While in Hanalei, head toward the ocean on Aku Road. Turn right at the T stop and follow Weke Road to its end. Here, you’ll find plenty of options to play in the ocean—surfing, stand up paddling, and kayaking—and one of the best beach walks in the state. “Dr. Beach” ranked Hanalei number one in the country in 2009, and every evening at sunset, people gather at the iconic Hanalei pier that juts 340 feet into the bay near the river mouth. 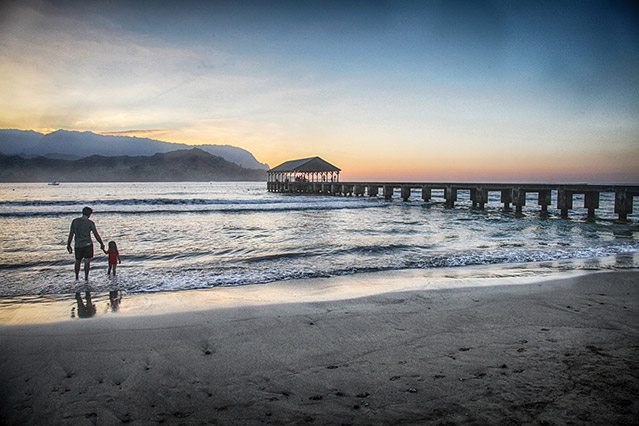 If you can pull yourself away from the beach, the Waioli Mission House, built in 1837 and home to the first permanent missionaries in the area, makes for a good history lesson. A museum now, the house is open for tours Tuesdays, Thursdays, and Saturdays from 9 a.m. – 3 p.m. Sitting alongside Route 560, the “little green church — Waioli Huiia Church—built in 1841 is always a good stop for photographs, rain or shine.

Speaking of the weather, in the winter months, there is rain. But rarely every day, all day. Of course, without rain, there wouldn’t be the ribbons of waterfalls in the mountains, lush greenery all around, or rainbows.

Between mile markers five and six, sits Lumahai, the beach Mitzi Gaynor made famous in the 1958 movie version of South Pacific. Due to year-round currents and rip tides, if you’re going to wash any men out of your hair, don’t do it at this beach. Stick to a nice, leisurely walk.

A pause for an important ocean safety message: The North Shore waters around Kauai change throughout the seasons. In winter, surfers flock to these beaches for the swells, kicked up by storms in the north Pacific. Unless you’re an experienced water person, play it safe year-round and swim at lifeguarded beaches only.

Now, on to Haena Beach Park. The eastern arm of the horseshoe-shaped bay, named Makua but often called Tunnels, provides exceptional snorkeling in the calm, summer months. This is also one of only a few shore-based SCUBA locations on the island. Equally impressive is the mountain towering over the beach. Its name: Makana. Translation: Gift. In days of old, Hawaiians would climb to its peak and toss embers of fire tucked inside hollow sticks that, when thrown, would explode into fireworks and float upwards of a mile out to sea on updrafts of air. 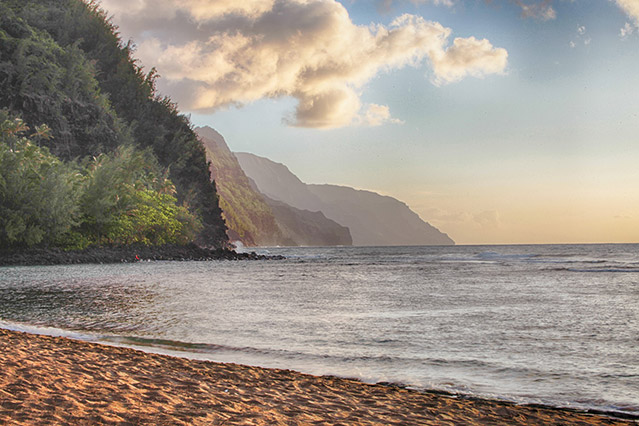 Maniniholo Cave opens directly across from Makua’s parking area. Legend has it that a great fishermen, named Maniniholo, of the Menehune, people said to predate Hawaiian’s settlement on Kauai, dug out the cave in search of spirits that were stealing his people’s fish. Today, there are no known Menehune but the wide-mouthed cave that extends several hundred feet into the side of the mountain can easily be explored.