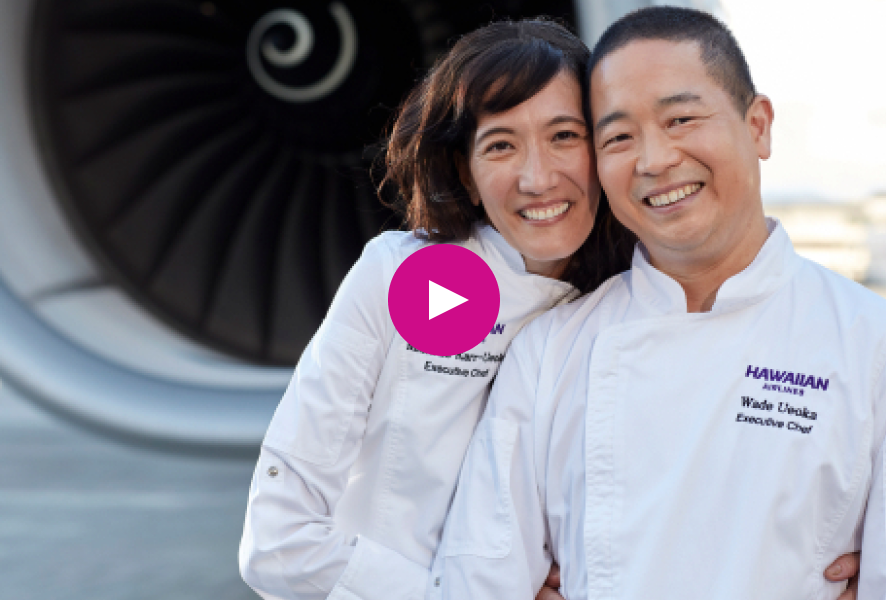 Chef Wade Ueoka was born and raised on Oahu and graduated from the culinary program at Kapiolani Community College. From his humble beginnings as a fry cook at Zippy’s Restaurants, he became chef de cuisine at the nationally recognized Alan Wong’s Restaurant. Ueoka has worked under various gastronomic leaders, including The French Laundry in Napa Valley, Calif., and Alex in Las Vegas. He has been recognized nationally as a Rising Star Chef and has received numerous local awards for being one of Hawaii’s leading chefs.

Chef Michelle Karr-Ueoka is one of Hawaii’s premier pastry chefs and was born and raised in Honolulu. While attending the University of Hawaii at Manoa, she discovered a love for cooking after working at Alan Wong’s Restaurant. She attended the Culinary Institute of America in Hyde Park, New York, and later worked at various award-winning restaurants, including Daniel and Per Se in New York, and The French Laundry in Napa Valley, Calif. In over a decade as a pastry chef, she has been recognized as a semi-finalist of the prestigious James Beard Award and received the Rising Star Chef Award as a pastry chef.  In 2013, Ueoka and Karr-Ueoka opened Oahu’s MW Restaurant, which was nominated by the James Beard Foundation in the category of Best New Restaurant in 2014. In 2015, the couple opened Artizen by MW in downtown Honolulu. 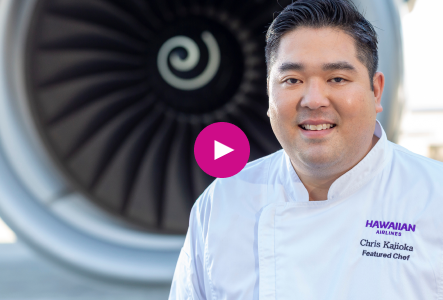 Chef Chris Kajioka was born and raised in Honolulu, Hawaii. He began his classical training at the prestigious Culinary Institute of American in Hyde Park, New York. His culinary journey continued at several prominent restaurants across the country including Ron Siegel’s Dining Room at the Ritz Carlton, Mourad Lahou’s Aziza in San Francisco and Thomas Keller’s iconic Per se in New York. In 2012, Kajioka returned to Hawaii and became the founding Executive Chef of Vintage Cave where he garnered his first of several James Beard nominations. After leaving Vintage Cave, Kajioka co-founded Senia in 2016 and worked there until 2020. He is now Chef/Partner of Miro Kaimuki, Papa Kurt’s and Waicoco Maui. 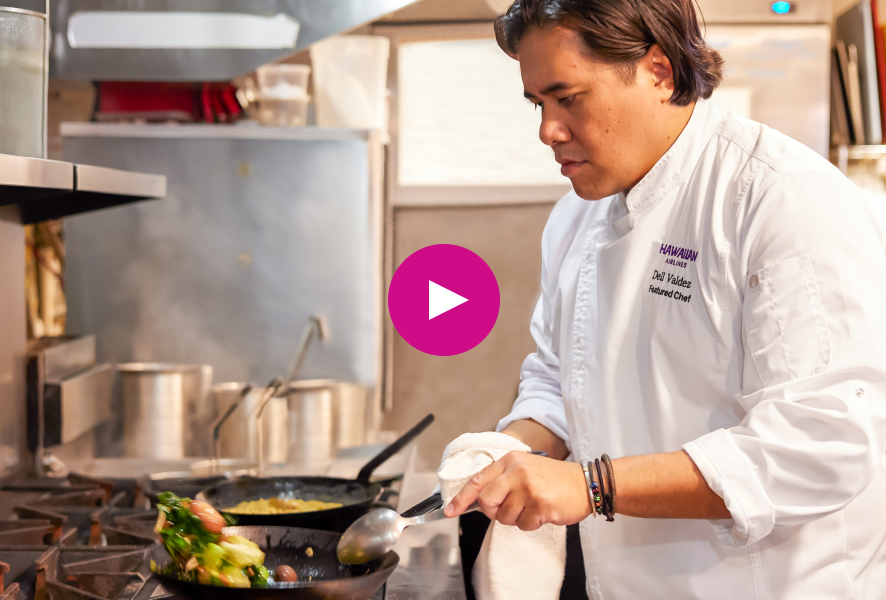 Chef Dell Valdez was born and raised on the island of Maui, where he made the decision to become a chef at a young age. He learned his early culinary skills from his parents, who are originally from the Philippines. Valdez cites his mom as his “greatest influence.” He now works as the executive chef at Vein at Kakaako in Honolulu specializing in modern Mediterranean cuisine. Valdez is a graduate of Kapiolani Community College Culinary Program and now calls the island of Oahu home. 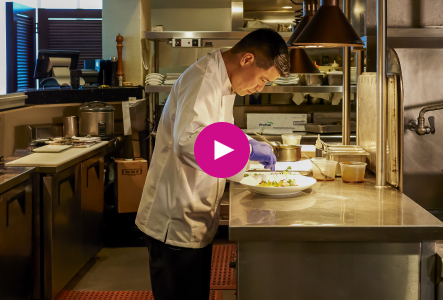 Chef Eric Oto joined the Featured Chef Series in 2018, preparing menus for flights from Hawaii to the U.S. mainland. Born and raised on the island of Oahu, Oto learned the philosophies of respecting and appreciating Hawaii’s diverse ecosystem from his father, a lifelong farmer and fisherman. This reverence is on display in how chef sources and prepares his dishes. Also committed to supporting Hawaii’s next generation of chefs, Oto serves as a chef-mentor for local high school students with the Hawaii Culinary Education Foundation and the Chaine des Rotisseurs Jeune Chef Competition. 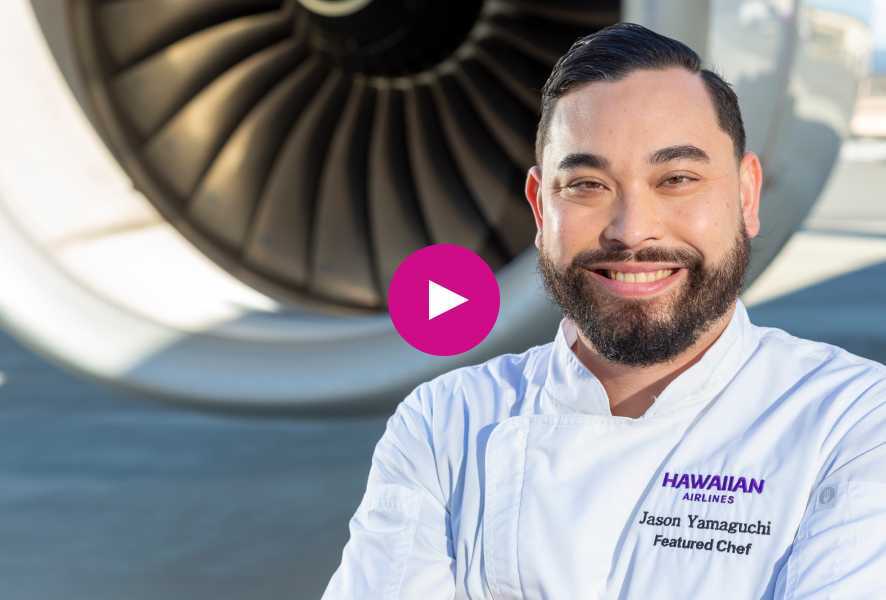 Chef Jason Yamaguchi was born in Los Angeles and raised on the island of Oahu. From an early age, he had the opportunity to work with Chef Roy Yamaguchi at various Roy’s locations around California. Yamaguchi went on work alongside other noted culinary greats such as Michelin-starred Chef Michael Mina and Hawaii’s own Chris Garnier of Roy’s Restaurants. He returned to Hawaii after 22 years spent gaining experience on the U.S. mainland and is now the executive chef and visionary of Honolulu’s newest French-Japanese dining concept, Mugen Waikiki. 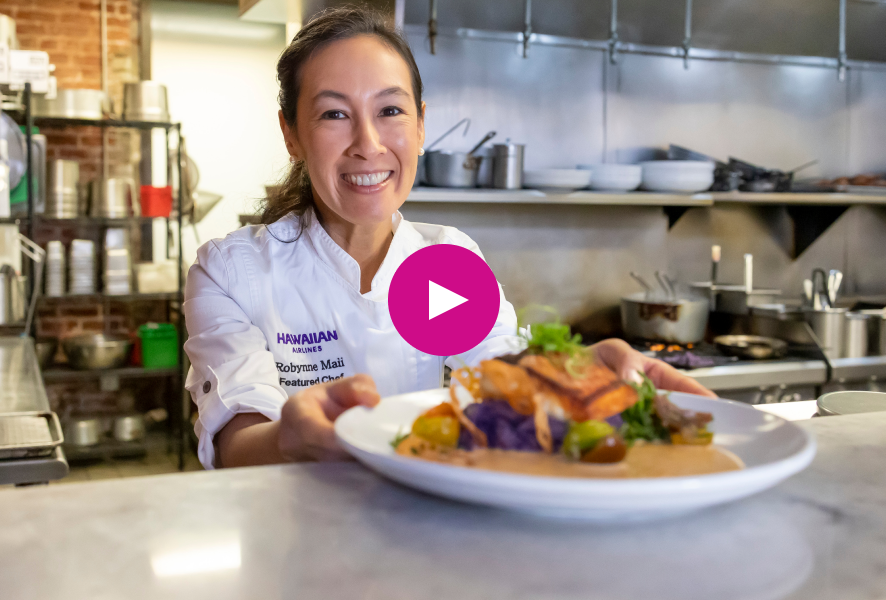 Chef Robynne Maii was born and raised in Honolulu and began her culinary adventure at 3660 on the Rise and Padovani’s Bistro and Wine Bar on Oahu. In 1999, she moved to New York City, where she worked at Union Pacific and the Waldorf-Astoria Hotel in their pastry banquet kitchen. Maii worked for Gourmet magazine, City University of New York (CUNY), and has been a cookbook judge for the prestigious James Beard Foundation Awards since 2004. In 2015, she and her husband opened Fête in Honolulu’s bustling Chinatown. In 2018, Maii partnered with Hawaiian Airlines to debut LunchBox by Fête, a café-style restaurant at the airline’s Honolulu headquarters.