Above: Diamond Head crater is often one of the first sites welcoming visitor to Hawaii.

So you’re ready to head to Hawaii! Here are 10 things you should know to enjoy your Hawaiian vacation to the fullest.

When you arrive and/or leave, you may be given a lei. This is a gesture of aloha (love, affection, esteem); thus, you should always graciously accept it and the hug or kiss on the cheek that comes with it. Closed (tied) lei should rest on the shoulders, half draped in the front and half down the back. Open (untied) lei are worn around the neck, with each side hanging evenly down the front. Pregnant women should wear only open lei; closed lei are considered bad luck because they symbolize the umbilical cord around the baby’s neck. 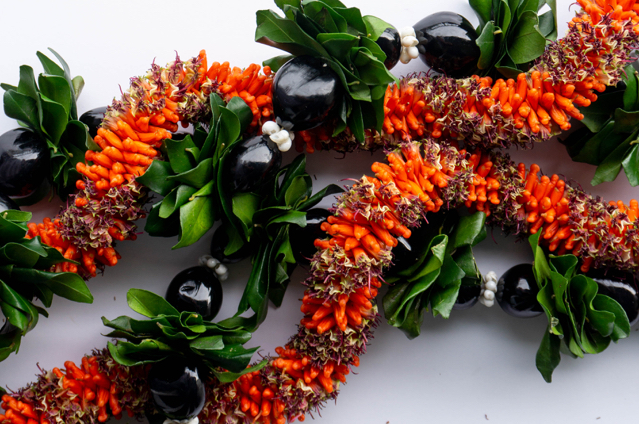 Above: Lei is a gesture of aloha and should be graciously accepted.

People from around the world started immigrating to Hawaii in the mid-1800s to work on sugar plantations. After fulfilling their contracts, the majority of them stayed, creating Hawaii’s wonderful melting pot. There’s a distinction between “Hawaiians” and “locals.” Hawaiians claim native ancestry; locals are Hawaii residents who may not have Hawaiian blood. Kama`aina refers to longtime Hawaii residents; malihini means newcomers.

3) Leave your slippers at the door

You’ll notice that people remove their footwear before entering a house, a practice traced to Japanese immigrants. Homes in Japan are typically built a few feet above the cold, damp earth. People remove their shoes at the ground level and step up into the house in their socks, so dirt and germs are not brought inside. Removing footwear also indicates they are entering the house with “clean” thoughts and spirits.

4) The Japanese tradition of omiyage

When visiting someone’s home, it is customary to bring omiyage (gifts) for the host. Food specialties from the area you’re from would be most appreciated (e.g., candy or wine). Avoid anything in increments of four because that’s considered an unlucky number (in Japanese, the word for death and four are both pronounced shi). 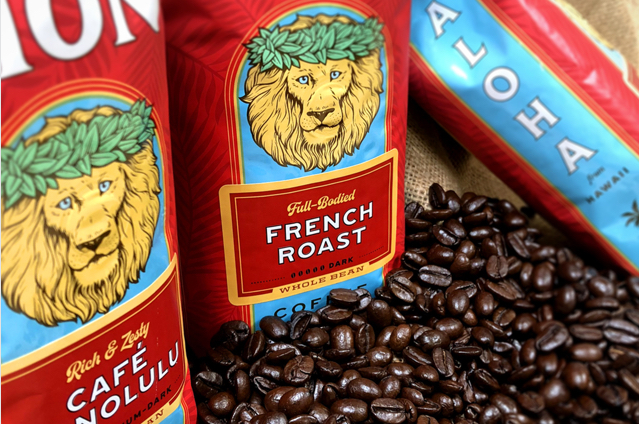 Above: Food items are popular omiyage (gifts) in the Japanese tradition and Lion Coffee is a favorite of visitors to take back home.

5) Bring your own bag

Be aware that Hawaii has banned plastic bags because of environmental concerns. Plastic is one of the major contributors to the huge garbage patches floating in the ocean, and many marine animals become entangled in it or eat it (a deadly mistake because it blocks their digestive tract). Carry your own bags when you shop or you’ll be charged 15 cents for each reusable one that the store provides for your purchases. Also, prices for just about everything are higher than the Mainland U.S. because goods have to be shipped here.

6) Keep your distance from marine life

While Hawaii is home to so many stunning sea creatures, it's important to respect marine life and their habitats, as human interference could have serious impacts. Federal law requires all ocean users to stay at least 100 yards from the humpback whale, Hawaii’s state marine mammal. For other sea life (including dolphins and the endangered green sea turtle and monk seal, Hawaii’s state mammal), 50 yards is the recommended viewing distance while on the shoreline. It's also important to remember that it is illegal to closely approach, tough, or feed any marine mammal or sea turtle in the wild. Additionally, please do not step on or remove pieces from reefs as they are built by coral, another marine animal. We recommend visiting NOAA Fisheries' article about viewing marine life for more information. 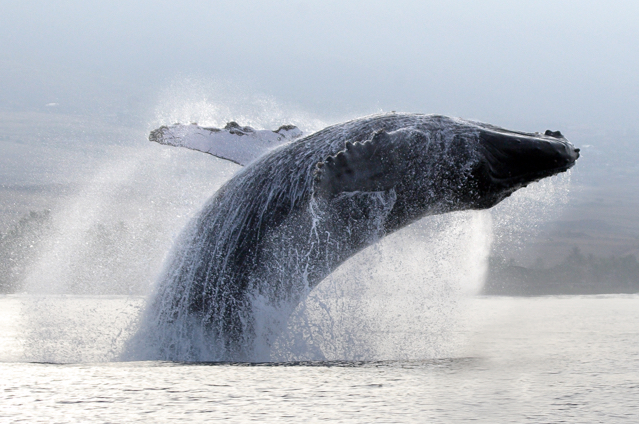 Above: Federal law requires you to keep your distance from marine mammals and other sea life.

Hawaii’s laid-back vibe goes for driving, too. Kamaaina seldom use their horn, and if another driver extends a courtesy to them, they’ll wave to say thank you. Carefully plan your day trips because traffic, especially on Oahu, can be bumper-to-bumper bad. Avoid the highways during morning and afternoon rush hour, which are roughly 6 to 9 a.m. and 3 to 6 p.m. on weekdays. Traffic is lighter on weekends, holidays and when school is not in session.

The Pacific is warm and inviting, but it can also be capricious. Swim at beaches staffed by lifeguards. Always go into the water with a buddy, and be alert; locals say, “Never turn your back to the ocean,” and that’s great advice. Look for beach hazard rating signs, and heed warnings and closures. Check HawaiiBeachSafety.com for current ocean conditions. Stings from box jellyfish can cause swelling, itching, welts, rash and burning pain (worse in severe cases). Jellyfish usually appear off south-facing beaches 8 to 10 days after a full moon. To get an idea of those times, go to WaikikiAquarium.org/interact/box-jellyfish-calendar. 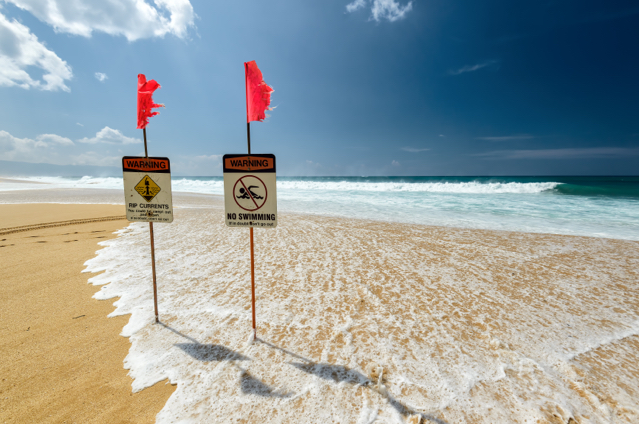 Above: Heed warnings and never turn your back to the sea.

North, south, east and west aren’t used for directions. Instead, locals say mauka (toward the mountains), makai (toward the ocean), ewa (west) and Diamond Head (east). You’ll also hear “windward” and “leeward.” Hawaii’s trade winds normally blow from the northeast to southwest. Windward is the direction from which the wind is blowing (the wetter north and east sides of the islands). Leeward is the direction toward which the wind is blowing (the drier south and west sides).

Learn common Hawaiian words by downloading the Hawaiian Words–Translation and Dictionary app on your iPad, iPod Touch or iPhone: iTunes.Apple.com. A few of those words have already been shared; here are several more:

a hui hou: until we meet again

kalua: to bake in the underground oven

poi: pounded taro that has been thinned with water