Above: There are several things to consider when deciding whether to rent a car on your Hawaiian vacation.

The decision to rent a car—or not—depends on two things: which island you’re visiting and what you’re planning to do. Except for Lanai, car rental companies operate at the airports, making it easy and convenient to get a vehicle. Options run the gamut, from small economy cars and sporty convertibles to luxury SUVs and four-wheel-drives. Navigating Island roads is a cinch with GPS and the free maps that are offered on your Hawaiian Airlines flight and at the rental agencies.

Should I rent a car on Oahu?

Restaurants, shops, beaches, activities and several major attractions (including the Honolulu Zoo, Waikiki Aquarium, Kapiolani Park and the U.S. Army Museum) are within walking distance of most hotels in Waikiki, so if you’re not going anywhere else, you won’t need a car.

If you do want to sightsee, it will be much easier with a car. One major benefit is you’ll be able to do things at your own pace. Oahu isn’t big; without stops, you can drive around the island in about two hours. That said, there are things you might want to see and do that aren’t accessible by public transportation. And while you could take a tour, you’d be on its set schedule, possibly spending more time at one place than you want to and less time than you prefer at another.

Oahu is the only island with a comprehensive bus system, simply known as TheBus (thebus.org). Luggage is prohibited on board, so if you’re traveling with bags, TheBus can’t take you to and from the airport. The good news is if you aren’t in a rush, many of Oahu’s top visitor attractions are on bus routes, including Chinatown, Iolani Palace, Sea Life Park and the Polynesian Cultural Center. On weekdays, it’s a good idea to avoid morning and afternoon rush hours, so you’ll have a better chance of landing a seat.

When paying fares, be aware exact change is required. Discounted rates are available for children aged 6 through 17, persons with disabilities and seniors 65 and older (you’ll have to show a valid U.S. Medicare card). One child 5 years and younger rides free when accompanied by a fare-paying passenger and not occupying a seat. You can buy one-day and monthly passes, which allow unlimited rides during the day or month purchased. Bus drivers issue one-day passes; Foodland, Times Supermarket and 7-Eleven stores are among the locations selling monthly passes. Call (808) 848-5555 to get specific route information.

Above: If you aren't in a rush and don't mind public transportation, The Bus may be an option to consider on Oahu.

Where does the Waikiki Trolley go?

Do I need a car on the neighbor islands?

Unless you want to just relax at your hotel, the answer is yes. Driving is the best way to get around and will provide you with the most flexibility.

Lanai Car Rental (lanaicarrental.com) is the only rental car agency on Lanai, and it’s based in Lanai City, not the airport. You’ll have to get from the airport to town via Lanai Taxi Service (808-649-0808) or Rabaca’s Limousine Service (lanaishuttle.com). Ask about other destinations those companies serve.

Four Seasons Resort Lanai provides shuttle service for guests between the airport and the hotel and the hotel and Lanai City. Guests can rent Jeeps at the hotel, but be prepared to pay dearly for the convenience: rates start at $150 per 24-hour period.

Heads up Lanai has only 30 miles of paved road. That means if you want to see beautiful but rugged sites such as Kaiolohia (Shipwreck Beach) or Keahiakawelo (Garden of the Gods), you’ll need a four-wheel-drive. That’s also true if Waipio Valley and the summit of Maunakea Volcano on Hawaii island are on your itinerary.

Even if you rent a four-wheel-drive, be sure to first find out which sites are on the rental company’s no-no list. Off-roading in places on that list violates the terms of your rental agreement, so if the car winds up being badly damaged, you’ll literally pay the price for it. 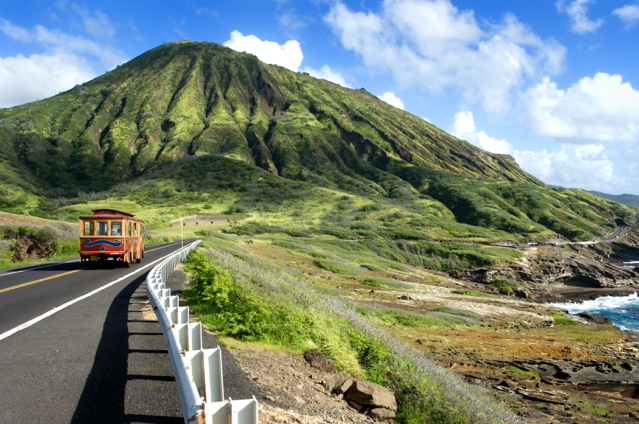 Above: The Waikiki Trolley can be a fun and convenient transportation option in Honolulu.

Other Things to Consider: